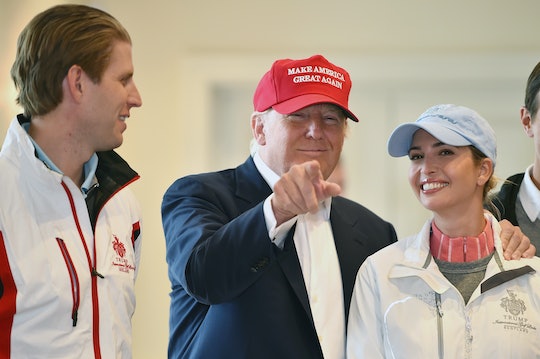 In the months since taking office, President Donald Trump has received steady criticism for the frequency of his golf trips to Mar-a-Lago, the Florida resort that he purchased in 1985. For those concerned about these outings, the president's son has a message. Yes, Eric Trump says the president's golf outings are good for building relationships with foreign leaders, allowing a level of camaraderie and mutual understanding that, according to Eric, would otherwise be difficult.

Eric's comments were part of a long, one-on-one interview published today at the Irish Independent, during which he spoke with journalist Niamh Horan about everything from North Korea to border walls to his childhood love for his Irish nanny. It's appropriate that golf eventually came up during the marathon interview, because it took place overlooking a golf course — specifically, at the Trump International Golf Links and Hotel on Ireland's west coast. According to Horan, Eric arrived at the interview in a "white open-neck shirt" and a "navy V-neck sweater," then settled into a couch by a blazing fire and looked "out on to the perfectly maintained golf course he had spent the morning inspecting."

It was in these hospitable environs that Eric felt comfortable enough to opine, at length, on his father's many positive traits, including his fondness for golf. Eric said,

You can sit with somebody in a golf cart where there might be cultural differences and language barriers and have a good time and build a friendship in a way that you could never do sitting across an office table from someone. And I think being able to go to Mar-a-Lago, it is my father's Crawford, Texas. Crawford was George W Bush's ranch and Bush brought foreign leaders from all over the world [there] ... Mar-a-Lago is an amazing estate that has been a very effective tool for [my father] to go down and get to know somebody while not sitting ... across a wooden partition, which instantly makes a relationship more strenuous.

While there's no reason to doubt that a lovely afternoon playing golf is one of many social activities that can strengthen diplomatic ties, Eric seems to be blissfully unaware of the specific criticisms mounted against his father's use of the Florida resort. Befriending a foreign leader over a round of golf is one thing; Turning Mar-a-Lago into an ad-hoc situation room, as occurred early this month when the President decided to launch an airstrike against Syria, is quite another.

In a photo from this meeting released to the public, for instance, Trump is shown in the Mar-a-Lago "situation room," which appears to be a guest room at the resort with a "Quiet Area" sign taped on the door.

While Eric drew a neat parallel between Mar-a-Lago and George W. Bush's ranch in Texas, there are obvious, fundamental differences. Bush's golf course was on his own private estate. Mar-a-Lago is a country club with members who pay $200,000 a year to be included. "Hostile intelligence services would love to plant bugs in a place like this,” John McLaughlin, a former acting CIA director, said about Mar-a-Lago in an interview with Politico.

Aside from ignoring the terrifying national security implications of his father's golf weekends, Eric also disingenuously wants us to believe that foreign diplomacy is the primary reason that a president goes golfing. It's not that his father likes to golf. No, it's because there's simply no other way to have a fruitful conversation with a foreign person. Seems that politicians and businesspeople have been doing meetings wrong for all of these centuries, because it turns out that tables (or "wooden partitions," as Eric calls them), are anathema to the art of making deals.

Not to mention, the notion that Trump spends all of his golf time engaged in foreign diplomacy is highly questionable. The president has spent seven of his 13 weekends in office at Mar-a-Lago, according to IsTrumpAtMarALago.org, a new project from the Center for American Progress Action Fund that keeps a running tally of Trump's time at Mar-a-Lago. During many of these trips, the White House has been reticent to specify how, exactly, Trump spent his time. In one notable instance, reporters were placed in a room with black, plastic sheets over the windows to prevent a view of the golf course.

The details are often hard to come by, but we know that Trump isn't always playing golf with foreign leaders, or with people that have anything to do with presidential politics, for that matter. For example, social media posts confirm that since being in office, Trump has golfed with Rory McIlroy, a professional golfer, and Nick Mullen, a sports agent.

So while Eric Trump wants us to believe that the president's time on the golf course is an innocent matter of foreign diplomacy, it's not so easy to pull the wool over our eyes.

More Like This
Megan Fox Explains Why She Asked Machine Gun Kelly If He Was Breastfed As A Baby
Family Of Grandfather Killed In Highland Park Mass Shooting Say He "Saved" Their Lives
What Exactly Are Minions, Anyway ?
Victoria Beckham Reflects On Being Forced To Weigh Herself On TV After Giving Birth