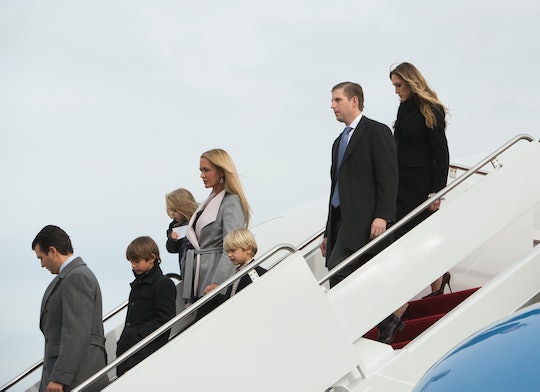 Let's Give Barron Trump A Break

President-elect Donald Trump's campaign was, in many ways, a family affair, so unsurprisingly, all eyes were on the Trump children as they made their way to the inaugural platform for their father's inauguration ceremony. But while his children were awaiting their official introduction, it appeared as though Eric Trump scolded Barron Trump at the inauguration. And given that many viewers were already feeling a great deal of sympathy for Trump's youngest child and the pressure he's been placed under on such a historic day, it was honestly pretty hard to watch.

Trump's youngest son was notably absent during his father's Make America Great Again! concert at the Lincoln Memorial the day before the inauguration, according to Us Weekly, and it was something social media was quick to pick up on. Trump reportedly told campaign donors during a dinner Thursday that Barron was "at home," but on Friday, Barron stood in line with the rest of his siblings as they walked together towards the stage at the Capitol. Barron stood at the back of the group, but eagle-eyed Twitter users have noted that, before heading out on the inaugural platform, Eric seemed tell Barron not to stand so close to him him and Tiffany, who walked together in front of him.

Although Donald and his eldest children, Ivanka, Eric, and Donald Jr., have come under criticism for their controversial involvement in Trump's transition, as well as his much-discussed conflicts of interest, according to The Wall Street Journal, many have expressed kindness and compassion for Barron, who at only 10 years old, has been placed in the incredibly difficult position of suddenly being in the national spotlight.

Although Barron and his mother, Melania, won't actually move into the White House until he finishes the remainder of his school year in New York, Barron will actually be the first presidential son to live in the residence since John F. Kennedy Jr., according to CNN.

Although not everyone considers the Trump family to be particularly likable, it does seem like perhaps Barron might emerge as one member embraced by the public. During his father's campaign, many people poked fun at the way that Barron seemed to have a hard time staying awake during his dad's speeches, according to The Huffington Post (which honestly must have seemed super boring to a young kid), and although the inauguration wasn't exactly something that all Americans were happy about, lots of Twitter users commented on Barron's sweet, relatable moments during a day which otherwise felt downright concerning and upsetting to many.

Of course, even though Barron is now the son of the president, he certainly still deserves privacy and respect like any other child who is in spotlight without asking to be. But unfortunately for him, the high-profile and controversial nature not only of his father, but also of his older siblings, means that the world will still be watching Barron whenever he is out in public.

Ultimately, that means that moments where he appears to be scolded by his much-criticized adult half-brother won't be easily missed. But at the same time, it also seems to mean that, despite their feelings about his relatives, much of America is rooting for the youngest Trump these days, and that they'll be behind him as he grows up in the White House over the next four years.