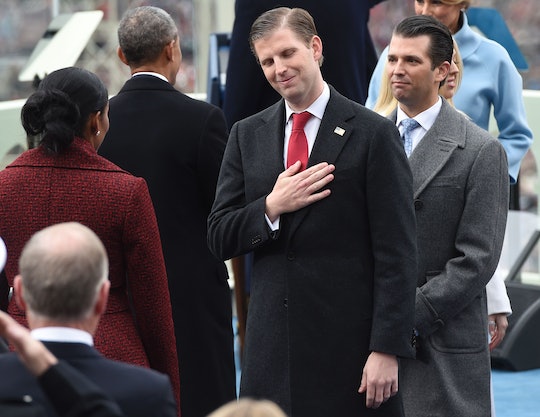 Eric Trump Tweets Should Have Been Deleted

With 874,000 followers, one of the President Donald Trump's sons, Eric Trump, has definitely caught the Twitter bug, though maybe not to the same extent his father has. Trump has never been one to hold back his feelings on Twitter, and it looks like his second-born son doesn't exactly mince words when it comes to social media, either. But Eric Trump's tweets also carry with them quite a bit of controversy, which likens him to his father once more in that respect. Though in the past Eric has deleted some tweets that have been contentious, he's left some not-so-OK ones up there as well — and that could have lasting repercussions on his father's presidency as well as how the American public view him.

For example: On Election Day, Eric voted for Donald and decided to show it off. He posted a photo of his ballot with the Trump/Pence bubble filled in, adding the caption: "It is an incredible honor to vote for my father! He will do such a great job for the U.S.A." Many were quick to point out that this was a totally illegal thing to do in New York, so Eric deleted his tweet later that day. Another instance in which Eric deleted an embarrassing tweet occurred in October of 2016. Adding "Finally the truth comes out! #Crooked Hillary" to a fake news story, Eric promoted an article in which a man claims to be a paid Trump protester. Perhaps the ".co" web address would have been a helpful hint, revealing the story's invalid nature.

Another tweet that probably should have been deleted but wasn't is pictured below. Here, Eric used an old photo to prove an inaccurate point. Overestimating by about 3,000, Eric used a photo of a Dallas rally to illustrate the crowds of "deplorables" attending his father's event. Eric claimed that the rally had occurred in Pensacola, Florida, though the Texas flag on the left of the image quickly subverts this. Eric tweeted again to correct the mistake with an actual photo of the Pensacola crowd, writing: "Hard to keep track these days! #WhatDifferenceDoesItMake #Pensacola #CrookedHillary."

Post-election, Eric continued his anti-Clinton sentiments. As Green Party Candidate Jill Stein raised money for a recount, Forbes contributor Chris Conover wrote a piece criticizing the efforts, claiming that "Jill Stein and Hillary Clinton could have saved the lives of at least 5,000 children had they invested in malaria prevention efforts rather than recounting presidential votes." Eric promoted the article, labeling it "The Sad Truth." For someone who's been given such wealth and privilege, it's hard to fathom how he could criticize others' fiscal habits.

The 33-year-old executive vice president of his family's company and founder of the Eric Trump Foundation is definitely one of his dad's biggest Twitter fans, retweeting him obsessively and defending him at all costs. Eric even advocated for Twitter to Gayle King of CBS This Morning, saying:

What I can tell you is my father’s Twitter is an incredible vehicle for him. I’ve seen firsthand throughout this whole process how dishonest the media has been. I am the biggest proponent of him communicating directly with the people, as opposed to the third parties who want to do anything to undermine him.

It appears that tweeting definitely runs in the family. Despite Eric's own promotion of false information, he seems to believe that Twitter is still an avenue to expose truth against further dishonesty — something his father appears to agree with as well. But with the Right's attack on "fake news," it might serve Eric Trump to think before he tweets, or at least, to look into the messages and information he's sending out to scores of followers who trust and rely on his messages.