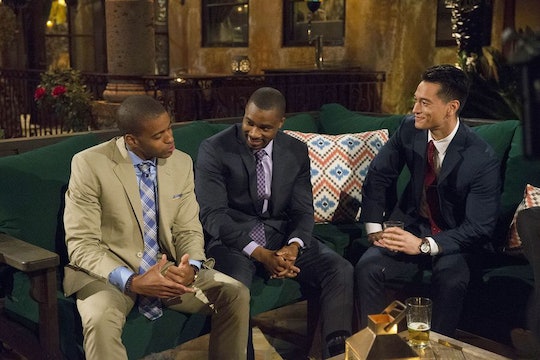 Eric From 'The Bachelorette' Prefers To Stay Positive

If there’s one thing you can never accuse Eric of on The Bachelorette, it’s not being optimistic enough, because Eric’s Instagram shows this Bachelorette contestant likes to stay positive through all things in his life. Even with the most recent issues with Lee this season, you might say that Eric was provoked and instigated so much that he had no choice but to stand up to the accusations being made against him.

Since Eric is also a motivational speaker, in addition to owning his own fitness training business, his Instagram is full of inspiring quotes and daily lessons of sorts, which are meant to help motivate his followers. Long before he was even chosen to be on this season, there were posts on Eric’s Instagram filled with words of wisdom and advice, so it’s definitely something he's extremely passionate about, which is something I think Rachel could really end up admiring him for.

The need to inspire and motivate seems to come naturally to Eric and his Instagram is proof that he obviously prefers to stay positive and live peacefully rather than get into prolonged arguments. Maybe going on The Bachelorette wasn’t exactly conducive to staying away from drama, but it’s all in the name of love, right? And you can't say that Rachel isn't worth the effort because she totally is. I mean, what's not to love?

Eric graduated from Hampton University in 2010 after studying entrepreneurship, but in addition to working on his own business, he’s also a motivational speaker according to his LinkedIn profile. It’s not clear if he actually makes public appearances to do this, or if it’s just a social media-based thing, but Eric’s Instagram is full of his words of advice and encouragement, which seems like a true testament to his character.

Right now on The Bachelorette, Eric has been receiving some negative attention from a few of the other contestants on the show, especially Lee. But hopefully the tension between them will die down quickly so they can get back to focusing on something way more important: Rachel.

Speaking of Rachel, Eric managed to earn the coveted group date rose in Week 3 after they had a heart-to-heart chat. So being open and real definitely pays off.

Eric’s Instagram is proof that The Bachelorette contestant is all about positivity in real life and could therefore end up having a real shot at winning over Rachel's heart.