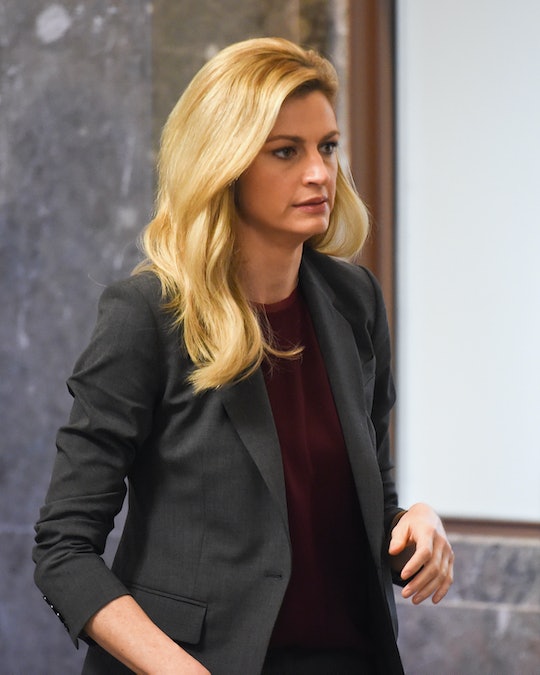 News broke this week that sports journalist and Dancing with the Stars co-host Erin Andrews won a lawsuit over nude videos that were secretly and illegally recorded at a Marriott hotel in Nashville, Tennessee. According to NBC News, a jury awarded Andrews $55 million in her civil lawsuit against the owners of the hotel, and against Michael David Barrett, the man who had allegedly and secretly recorded nude videos of Andrews from a self-fashioned peephole in her room.

According to The Chicago Tribune, Barrett pleaded guilty to criminal charges of interstate stalking. He was sentenced to two and a half years in prison. This subsequent civil lawsuit was initiated by Andrews in order to receive compensation for the significant grievances she had reportedly suffered. While on the stand, Andrews testified to the ongoing emotional turmoil and depression that she's experienced as a result of the online distribution of the nude videos, which have been viewed by tens of millions. According to the Tribune, Andrews broke down in tears repeatedly during the deliberations. At one point, she described her experiences with constantly hearing about the video:

This happens every day of my life. Either I get a tweet or somebody makes a comment in the paper or somebody sends me a still video to my Twitter or someone screams it at me in the stands and I'm right back to this. I feel so embarrassed and I am so ashamed.

The judge and jury determined that 51 percent of damages — about $28 million — should be paid by Barrett, and another 49 percent — about $27 million — should be paid by West End Hotel Partners and Windsor Capital Group, the hotel companies that owned and operated the Marriott where the crime took place. According to NBC News, Andrews' lawyers argued that the hotel was at fault for telling Barrett which room Andrews was staying in, and for not alerting Andrews that someone had specifically requested a room next to hers. Barrett took the cell phone footage by removing the peephole to Andrews' door.

The incident at the Nashville Marriott —which occurred eight years ago, when Andrews was 29 — wasn't the only time that Andrews' privacy was allegedly violated by Barrett. According to Salon, Barrett had reportedly followed Andrews to three cities, and filmed her in two of them. In a 2013 deposition, Barrett revealed that he shot the videos because he wanted to make money off of them. He chose Andrews because her name was trending on Yahoo at the time.

The Andrews case serves as yet another stark reminder of the myriad sufferings of women in the professional sphere everywhere. Andrews, though the victim of a crime, was herself scrutinized during the fallout of the video's release. According the The Washington Post, many accused Andrews of staging the video to gain exposure for her career. She was further criticized for telling her story on Oprah, and some cruelly hypothesized that exposure from the video landed her as a contestant on Season 10 of Dancing with the Stars.

According to ET, it came out during Andrews' testimony in this civil suit that these accusations were baseless — not that she needed to defend herself. Andrews specified that she was already being interviewed for Dancing with the Stars before the video leaked, and that ESPN, her employer at the time of the video's release, told Andrews that she needed to do a public interview about the video before returning to work—hence Oprah.

The only reason that Andrews testified about this in the first place is because the defense attorneys for the hotel companies actually argued that since Andrews' career benefitted from the video, she shouldn't be paid damages, according to The Washington Post.

Andrews has certainly seen a good deal of injustice in her life over the past several years, so hopefully this positive ending to the saga will help her find closure.