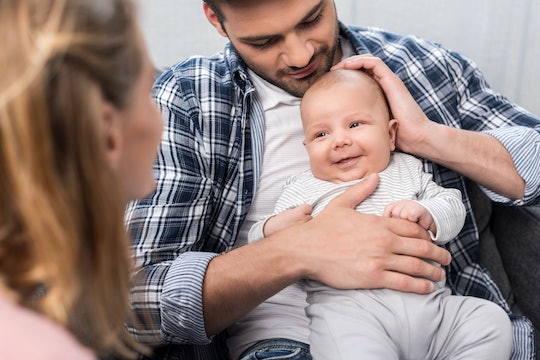 Having a baby while employed can be difficult, particularly when employers don't provide new parents with leave to adjust to their new roles. Estée Lauder's new parental leave policy aims to make this adjustment a bit easier. By accommodating both mothers and fathers, as well as those looking to get fertility treatments or adopt a child, this company is breaking the mold on parental policy. With the U.S. landing dead last on the list of developed countries when it comes to parental leave, Estée Lauder is setting an important precedent.

As of May 1, both salaried and hourly employees at U.S. Estée Lauder locations who give birth to, foster, or adopt a child will receive an automatic 20 weeks of paid leave — up from the company's prior 12 weeks of leave policy — according to POPSUGAR. What's more, those who give birth are entitled to an additional six to eight weeks. The only qualifications for the leave are that employees work a minimum of 30 hours per week, for at least three months before taking leave.

Along with the generous paid leave policy, the company will also offer employees up to $10,000 to cover adoption costs and will continue to offer $20,000 a year towards fertility treatments and reduced childcare costs, as Business Insider reported. Estée Lauder is also currently working to include programs that ease employees back into work after time on leave by providing options like flexible hours and the ability to work from home, according to POPSUGAR.

Perhaps most impressively, moms aren't the only ones entitled to reap these benefits. Fathers, adoptive parents, foster parents, or LGBT parents are also included in the company's efforts. "We [at Estée Lauder] don't want to dictate what their families should look like," a spokesperson for the company told Business Insider.

Dads should be able to take time with their new babies as well. Paternity leave has been linked to higher paternal involvement and improved cognitive outcomes in babies, according to HuffPost. Jennifer Baxter, Senior Research Fellow at the Australian Institute of Family Studies, told the site as much:

Father’s leave is linked to more involvement in childcare activities such as helping a baby to eat, changing nappies, getting up in the night, bathing and reading to a child, compared to fathers who took no leave.

She also explained that paternity leave can help kids in school down the line, according to HuffPost:

Despite the known benefits, American companies lag painfully behind those in other developed countries. The Society for Human Resource Management reported that just roughly 12 percent of companies in the U.S. offer paid maternity or paternity leave, according to Forbes, down from the average of 17 percent in 2010. The U.S. is one of the only two countries in the world that doesn't require employers to provide new moms with a minimum amount of paid time off, as reported by the International Labor Organization.

Estée Lauder's improvements to its leave policy and other parental benefits stand as an example of how companies can look out for the best interests of their employees and promote happy, healthy families. Bravo!