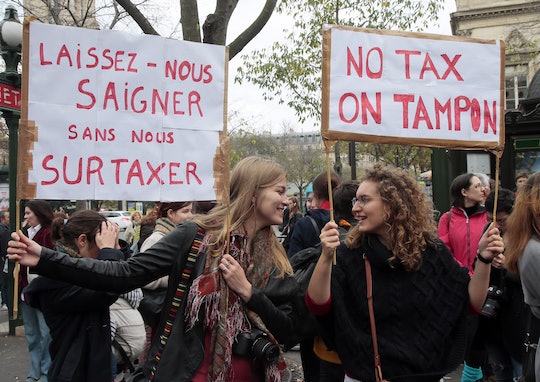 EU Scraps The Tampon Tax & American States Need To Start Repealing It, Too

Apart from (maybe) the reminder that you're lucky to be a healthy woman, there is nothing luxurious about having your period. But in the United States, many states tax tampons as pads as luxury items. Proving that Europe might be a little flexible when it comes to women's rights all around, the EU scrapped the tampon tax this week at an economic conference in Brussels. Because it is more than just an economic issue. Even President Obama was surprised to learn that tampons and pads were taxed as luxury items and turned the issue into a feminist one. He suggested it was because men made the laws and well, he probably has a point.

Sanitary products are not luxury goods, they're medical goods, and as such states aren't allowed to tax them. But those are state laws, so it's up to women (and some men, hopefully?) to lobby their respective governments to repeal the tax. So far, that hasn't really been working all that well.

In Utah, an all male legislative panel voted to keep the tax in the name of "predictability." Like the predictable way your period comes every month and you have to stock up on products. Those revenues would theoretically be missed and changing the tax too confusing for citizens. They should come up with a better excuse than that.

Pennsylvania and Minnesota have done away with the tax altogether. In New York, there's a class action lawsuit to abolish the tax and distribute a refund for women who've paid the state's 4 percent tax on tampons and pads. In Chicago, the city's lowered, but not removed, the tax on tampons and other sanitary products.

In New York, Grace Meng (D-N.Y.) successfully lobbied the Federal Emergency Management Agency (FEMA) make sure sanitary products were distributed to homeless shelters and emergency sites. A New York city councilwoman has also initiated a pilot program in schools in Queens where tampons and pads are free and budgeted for along with other necessary items, like toilet paper and hand soap. The program is to encourage the city to expand the program to all schools and even homeless shelters.

The EU's decision to get rid of the tax is a very big deal in changing how we talk about periods and women's health overall. They've pledged to use the proceeds from the tax to distribute among women's charities, so at least there's some good to come out of making women pay for having their periods.

The problem is that we don't talk enough about having our periods. It's easier to just buck up and shell out your hard earned dough for overpriced tampons and pads and not ask any question. There are also many out there who don't even know there's a reason sanitary products. Even Obama admitted that he wasn't aware of the "luxury" status of tampons and pads until blogger Ingrid Nilson asked him during a YouTube interview. Perhaps there's nothing insidious about male legislators who think the luxury item tax is necessary. Maybe they're watching too many tampon commercials with smiling women and we should start making more uncomfortable tampon ads. If we're going to change their minds, we're going to have to remind them that affordable and accessible tampons and pads are a right, not a privilege.