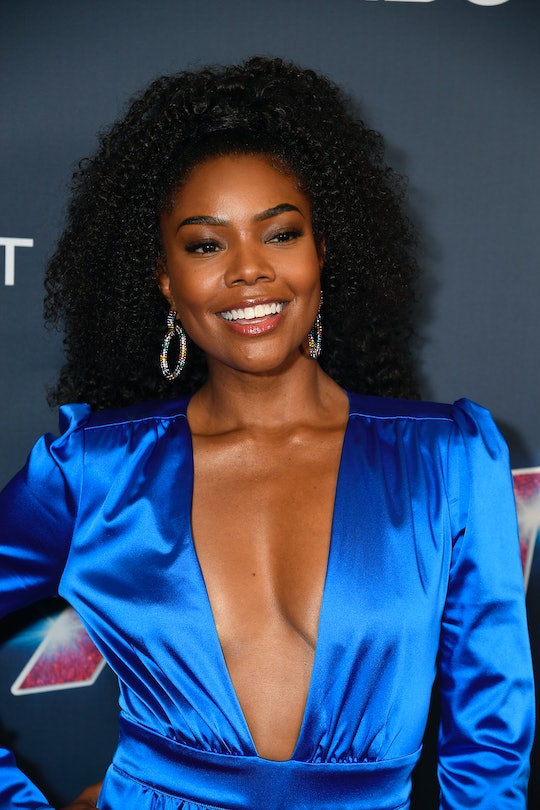 If you're a celebrity enthusiast, then chances are you totally geek out during awards shows — and especially during the red carpet events leading up to them. There's just something about all of the glitz and glam, along with the anticipation of seeing what your favorite stars decided to wear. But you know what would make the lead-up to the awards even better? Babies! Because apparently, Eva Longoria and Gabrielle Union want more babies on the red carpet.

In case you've lost track, Union and her NBA player husband Dwayne Wade welcomed a baby girl named Kaavia via surrogate in November, according to People. Meanwhile, in June 2018 Longoria gave birth to a son named Santiago, who she shares with husband Jose Baston, according to Us Weekly. These busy mamas recently sat down for a joint interview with Harper's Bazaar to chat about how they're working to overcome logistical hurdles of being a mom in Hollywood — and to end the stigma of it, as well.

Union, 46, credits Jessica Alba — whom executive produces L.A.'s Finest alongside Union — for paving the way for her to bring Kaavia to work with her.

"When I came back from maternity leave, Jess made sure my trailer had everything that hers had so Kaav could come right to set," Union said, according to Good Morning America. "No one’s had to make that crazy, crazy sacrifice of going back to work and just, like, leaving your kid. Jess was like, f*ck that. I’m going to create the Hollywood that I’ve dreamed of and that I need,” Union said.

In fact, Union has taken baby Kaavia to at least three different red carpet events. "We dress her last-minute because she’s a drooler and she pukes," she told Harper's Bazaar. "It takes a village to put a baby on the red carpet."

Meanwhile, director-actress-producer Eva Longoria is kicking *ss and taking names while bringing baby Santi on-set with her. As part of their interview with Harper's Bazaar, Longoria and Union posed for photos on a red carpet alongside their adorable little ones.

"This photo shoot is so poignant because it’s a metaphor and a symbol," Longoria told the magazine. "We don’t take our strollers and babies on red carpets. This is what it would look like."

Personally, I would love to see more celebrity parents rocking red carpets with their babies. Infants in tiny tuxedos and ruffled dresses would make my mama heart burst. Plus, why should a brand new — and possibly breastfeeding — mom be forced to choose between attending an event and staying home with their newborn?

Still, I totally understand if stars would rather leave their babies at home. Worrying about their little ones spitting up, blowing out, or getting cranky because it's past their bedtime seems like it could be a ton of added pressure to an already stressful event. Plus, parents deserve to have an adult night out without their kiddos, if that's their desire.

"I think it's important that we set the stage that this is a family-friendly environment and a feminist environment, which means that women are equal to men in this world we've all created," Jessica Alba told The Hollywood Reporter in May.

Amen! The key here is this: Moms should be able to make the choice for themselves — and only on the red carpet.