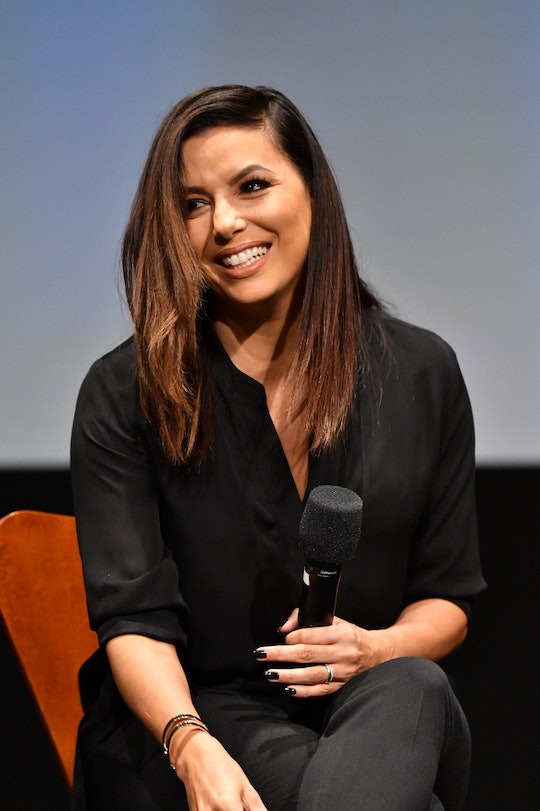 Eva Longoria Is Pregnant With Her First Child!

Is it just me, or does it seem like every time I turn around, another celebrity is announcing a pregnancy? Unfortunately for Kardashian fans, though, neither Kylie Jenner or Khloé Kardashian are the latest to confirm a bun in the oven. (Sorry, guys.) That's because congratulations are in order for another star. Us Weekly reported Tuesday evening that Eva Longoria is pregnant with her first child. The 42-year-old actress and her husband, Jose "Pepe" Baston, 49, will welcome their baby in spring 2018, according to the publication. And according to People, she's four months along with a baby boy!

Although this is Baston's fourth child — he has three kids: José, Tali and Mariana with ex-wife Natalia Esperón — it will be the couple's first child together. The official baby news comes after years of on-and-off-again pregnancy rumors and speculation. Back in September, fans suspected she was with child as a result of vacation photos posted on social media, according to Metro. The Desperate Housewives star was spotted wearing a loose-fitting floral dress while in Athens, Greece with her husband.

And in April, she denied being pregnant when rumors started after photos of her with a bloated belly surfaced. "I saw some pictures of myself really fat on a boat. I have to tell you all I did was eat cheese," Longoria posted on Snapchat, according to the publication. "So that’s the news of the day. I’m not pregnant, just eating a lot of cheese, a lot of wine, a lot of pancakes."

"Everybody's saying I'm pregnant and I'm not," she wrote alongside a photo of herself in a bikini, according to the Daily Mail. She continued:

I was just lactose intolerant apparently. Today no belly... I just had to share, because my whole family's calling me, asking me if I'm pregnant. Yes, I looked pregnant. But that was just a ball of cheese. Ball of cheese in my stomach.

The pregnancy rumors have been fairly regular ever since Longoria tied the knot with Baston in May 2016. As recently as Dec. 6 — when Longoria was at the L’Oréal Paris 12th Annual Women of Worth event — an eyewitness said Longoria “kept touching her stomach” while posing for photos, Us Weekly reported. (Although this time it was real!)

Perhaps the high alert for any sign of a bump comes from a 2015 interview with People, in which Longoria references her ticking biological clock. “I just turned 40, so I have thought, ‘Is time running out?’" the actress told the publication. “I should be thinking about [children], but I feel like my life is full." Of her three stepchildren, she added, "They’ve been such a gift in my life. I don’t feel like we are lacking because we don’t have a baby."

People reported that Longoria and Baston started dating back in 2013 and became engaged in December 2015. Longoria had been married twice before, according to the publication. “I never thought I would get married again. It’s him, he makes it all worth it,” the actress told People on their one-year anniversary. “I’m not a fan of marriage; I like being married to him,” she added. “He surprised me at dinner with a beautiful gift and a song and a singer it was just amazing.”

Needless to say, fans are incredibly excited about Longoria's impending motherhood. Many have already taken to Twitter to express their reactions.

"Congratulations @EvaLongoria! I know how much you and your husband are in love. Very happy for you," one person tweeted.

Another Twitter user wrote, "@EvaLongoria is pregnant & I am way too excited about it! Awe!"

Yet another person was understandably skeptical of the news, considering how often pregnancy rumors swirl around the actress. "I hope this is true, you people have made this poor woman pregnant for the last 10 years," she tweeted.

Although it seems like the real deal this time around (I mean, her reps have confirmed it to Us Weekly and everything,) I'm going to have to agree with jen on Twitter — please, please please let Longoria be pregnant for real this time. I can't imagine what it must be like to want to have a baby, but not actually be pregnant when pregnancy rumors start flying. I'm so happy she (fingers crossed) won't have to endure that again. Congrats, mama! You're in for a wild ride.