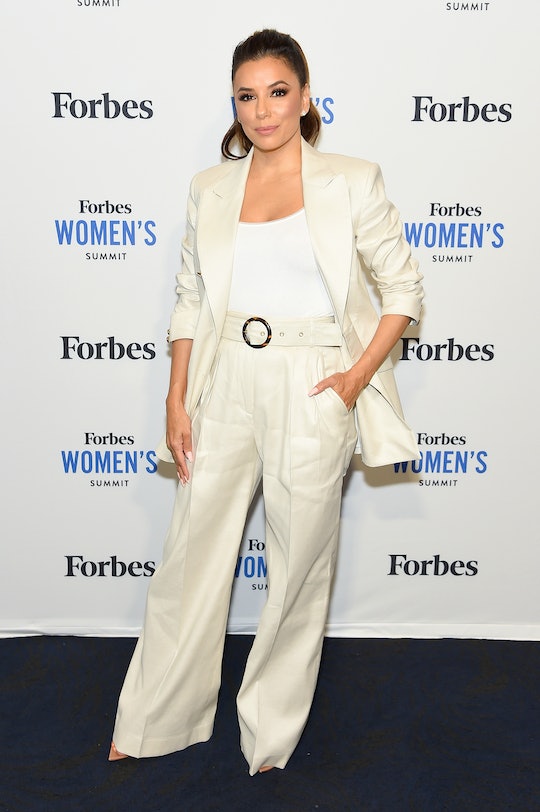 Being a working mom is hard, especially for breastfeeding moms. Trying to get things done while also ensuring sure baby is fed, or you have a chance to pump, can prove difficult, especially in less progressive workplaces. It forces some moms to choose between returning to work and staying home longer, if not for good. A few lucky moms get to bring their kids with them to work, or are provided with pumping spaces. While that presents its own challenges, it also cuts out a lot of the stress. Eva Longoria shared a photo breastfeeding while directing and it proves moms can do anything — even while nursing.

Longoria, who gave birth to her first child in 2018 according to Us Weekly, tweeted out a series of photos showing her feeding her son, Santiago, while working on the set of ABC's Grand Hotel. The 44-year-old actress praised women who "multitask everyday," adding that she was grateful to have had such a supportive "crew & cast," who never shamed her for doing what she had to as a mother while working on the show.

She posted four separate photos, all of which showed her breastfeeding in different scenarios. Longoria appeared behind the camera and in meetings, all with her son nursed.

Longoria isn't the first celebrity mom to bring a baby on set with her. Mindy Kaling, who gave birth in 2017, opened up to Variety about returning to work weeks after her daughter was born. She admitted that it wasn't easy shooting Late Night while nursing a 12-week old. In fact, Kaling warned other moms not to try it.

"Don't do it. You don't want to have to breastfeed between scenes," she told Variety.

Difficult or not, Kaling and Longoria both are lucky to have had the option to bring their children to work with them. Many working moms don't have the option, so they opt to wean their babies early, according to the Center for WorkLife Law. The organization found that in 2015, 4 out of 5 moms (83.2 percent) started breastfeeding their babies, but only 36 percent continued for the full first year of their children's lives. This is due mostly to a lack of options, the Center for WorkLife Law stated. Many moms cited a lack of private space or adequate time to pump, along with general discrimination toward moms in the workplace, makes it difficult for working mothers to continue breastfeeding once they start working again.

The Fair Labor Standards Act (FSLA) mandates that employers provide reasonable break time for moms to express milk for up to a year after birth, as well as a private space separate from a bathroom and free of intrusion from the public and other coworkers to be used for pumping. Despite this, and the fact that millennial moms make up more than 80 percent of births in the U.S., many work places do not follow these practices.

When it comes to balancing work and motherhood, some moms just have it down. Clearly that's the case for Longoria. There's still a lot of progress to be made when it comes to welcoming women back into the workforce after giving birth. Hopefully one day breastfeeding or pumping at work will be commonplace. For now, moms will just have to keep pushing forward to bring about that change.