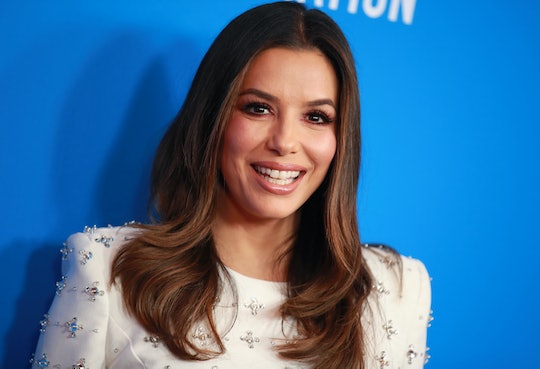 Some might be worried about Eva Longoria's stress levels given her ever-busy career, but the actress has never felt more at ease. Having dialed back her appearances for a couple of years as she focused on her marriage and son, Longoria couldn't be in a better place at the moment. And Eva Longoria's thoughts on becoming a mom later in life are a reminder that some things are worth waiting for.

As Us Weekly reported, Longoria is incredibly happy in her role as mom to Santiago, 1, whom she gave birth to at 43. But before Santiago made his debut, the twice-divorced star told the outlet she didn't plan on having children at all, especially since husband José Bastón had three kids from a previous marriage. Longoria and Bastón already had their hands full, to put it simply.

But despite Longoria's feeling of completeness, she decided to get pregnant at age 43. "[The baby] was meant to be with me at this stage,” she told Parents Latina magazine for its August/September issue. I can't say for certain, but I have a feeling many later in life parents can relate to this sentiment.

Longoria explained how having a baby at the right time and with some maturity under her belt has made her "more patient." She added, "And I don’t work as much even though it doesn’t seem that way!"

Speaking of work, Longoria is currently juggling parenthood with starring in Dora & The City of Lost Gold. Longoria revealed she brought her son on location while filming Dora, telling Cafe Mom: "I had my son on set...because I was breastfeeding."

Of course, there's no shame in having help. Props to Longoria for making things work.

On the topic of giving props, it's pretty amazing Longoria is using star power to bring more visibility to Latinx people and their many achievements. "Dora is this brave, fun, fearless girl who is a superhero, the first Latina superhero that we've had in Hollywood. And as her parents, we are college-educated explorers as Latinos... it was just all beautiful to really celebrate what our culture is about," she explained to Cafe Mom.

With everything she has going on, Longoria sounds pretty energized vs. your typical toddler parent. But as she told Parents Latina, becoming a mom has given her the energy to tackle multiple goals. "The stakes are higher now that I have a child – I’m making sure I’m doing my part to leave the world a better place for him," Longoria, who recently shared her support of the Moms Demand Action For Gun Sense in America network, said.

Longoria also touched on the importance of raising her son right, telling the publication: "There’s more pressure to raise a good man today and to make sure he contributes to society and understand female equality." True that.

Longoria sounds like she's a great mom, especially since she's someone who's ready to use her life experience to help out the next generation. And as for her path to motherhood, I'm glad she did what was best for her own personal journey.