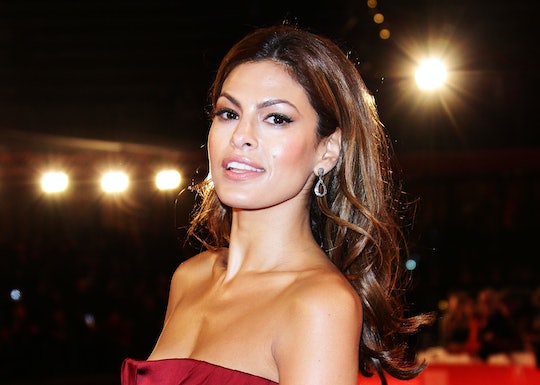 Being raised in a multilingual or multicultural home isn't always as easy as it sounds. Though you might grow up learning more than one language or culture, which can have many benefits long into adulthood, actually teaching your kids how to speak multiple languages at once isn't always straightforward. Take it from Eva Mendes, whose daughters are learning Spanish, despite their mother's attempts to get them to not speak Spanglish.

In a recent interview with The Talk on CBS, Mendes opened up about the two daughters she shares with Ryan Gosling, Esmeralda, 4, and Amada, 3. The girls, she told the news outlet, are having a hard time differentiating between English and Spanish words and sentences, because Mendes uses them interchangeably. "It's harder than I thought because I speak Spanglish and that’s what they’re picking up," she told The Talk. "It's adorable, but it's technically not a language."

Mendes — who is Cuban, according to Page Six — went on to explain, "So my little girl will be like, ‘Mami, my boca (mouth) hurts because I think something got stuck in my diente (tooth).' It’s so cute but that’s not really going to work out there."

During the same interview, Mendes also mentioned that she didn't think she wanted kids until she met Gosling, saying: "It took a minute, but yeah, I was just never one of those women who really wanted children, and then I fell in love with Ryan... Then I was like, ‘Oh, I get it, I don’t want children, I want your children. I want your babies.'"

It was one of the very few times that Mendes or Gosling has opened up about their daughters to the press, as they have both been forthcoming about wanting their lives to remain as private as possible.

In a recent interview with The Oprah Magazine, Mendes explained their rationale: "We just want to make sure our kids are protected and have somewhat of a normal kid experience. So, keeping them out of the public as much as possible, just feels right and normal to us."

However, she went on to say that though she won't give too many more details, both of her daughters are creative. Mendes believes kids are "artists by nature," and she wants to encourage that with her kids. "I probably wouldn’t describe them too much because, remember, we're keeping it to ourselves. But I will say that we definitely encourage the arts," she said in the interview with The Oprah Magazine. "There’s crayons in every room and there’s always paper available so that they can create. I just think it’s so beautiful that children are natural creators, and they are, too. They just want to make stuff, which is so cool. I’m just really into that phase right now."

Private as they may be, it's clear that both Mendes and Gosling are absolutely in love with parenting — and one another — even despite the challenges along the way. "I know that I'm with the person I'm supposed to be with," Gosling previously said in an interview with People, as HELLO! Magazine reported, adding that the only quality he would look for in a woman is that "she's Eva Mendes. There's nothing else I am looking for".

And in an interview with E! News last month, Mendes shared that she was currently feeling more ambitious about "home than the workplace," which is totally OK. As for her and Gosling, she told E! News they are just starting to get out of "survival mode" with two babies and young toddlers, and it seems the family is hitting their stride... Spanglish speaking and all.