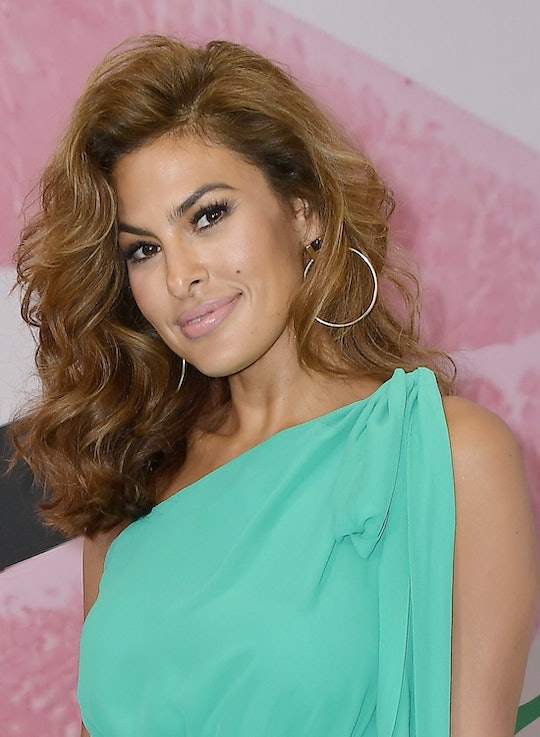 Is it just me, or does the majority of celeb moms seem to have ultra-human powers? Not only are they talented, rich, and famous, but so many of them appear to "bounce back" from pregnancy and new motherhood in two seconds flat. And they seem to actually enjoy the grueling process. Granted, these celeb-moms can afford things like personal trainers, nannies, and personal chefs that give them a leg-up on the rest of us. But still. I'd appreciate a little realness every now and then, you know? Well apparently, Eva Mendes hates working out as much as you do, and her honesty is a breath of fresh air.

In case you lost track — because let's face it, Medes and her husband Ryan Gosling are incredibly private people — the actress has two young daughters, according to Vanity Fair: Esmeralda, 4, and Amada, almost 3.

Mendes recently opened up to Women's Health about her relationship with working out. And the 45-year-old's comments probably sound reassuringly familiar. “I’m envious of women who enjoy working out, because I have the worst attitude about it,” Mendes told the publication for its May cover story. “My vanity gets me to the gym — and obviously health reasons — but I’m kicking and screaming the whole way through.”

Hmmm. You mean I'm not the only one who silently swears to myself the whole time I'm exercising?

Although Mendes is obviously not a fan of working out, she told Women's Health that at last, she's "starting to feel like a person again" after having her two daughters. And I feel that, too. Because after carrying two children — especially so close in age — it takes time for a woman's body and mind to feel even remotely "normal" again.

Speaking of super relatable Eva Mendes quotes. Mendes shared with Shape in March 2017 why she doesn't make a ton of press appearances with her actor husband. “What people don’t know about me is that I love being home,” she told the publication, according to Today. "Instead of hitting the red carpet, I’d rather be with our girls."

Honestly, same. Not that I do, but if I had the choice between posing for a bunch of photos on a red carpet and chilling out at home in my leggings with the kiddos, there's no contest. I'd rather be cozy and comfy indoors without all of the expectations.

Getting back into some sort of exercise routine (or really, any routine) after having a a baby has always been a struggle for me. Not only because my body was fighting me every step of the way. But also because I was incredibly anxious to leave my baby in order to hit the gym. (I was convinced my little one was crying the entire time I was gone because she wanted to nurse.) For me — a distance runner — that first month back on the track was especially brutal. I couldn't remember why I liked running in the first place because pregnancy had taken away any core strength I had, and my arms and legs felt like Jell-O.

Like Eva Mendes, vanity and health ultimately won out, and I've kept at it. But that doesn't mean I have to like it. Shout out to this fierce mama for being real about the struggle.

More Like This
Serena Williams Shares How Her Daughter Comforted Her After Losing A Big Match
Mila Kunis & Ashton Kutcher Reveal They Have An Open-Door Bathroom Policy
Exclusive: Watch Hayden Panettiere Talk About Addiction Treatment 4 Months Postpartum
Gabrielle Union Admits She May Be Becoming A Bit Of A Dance Mom With 3-Year-Old Kaavia