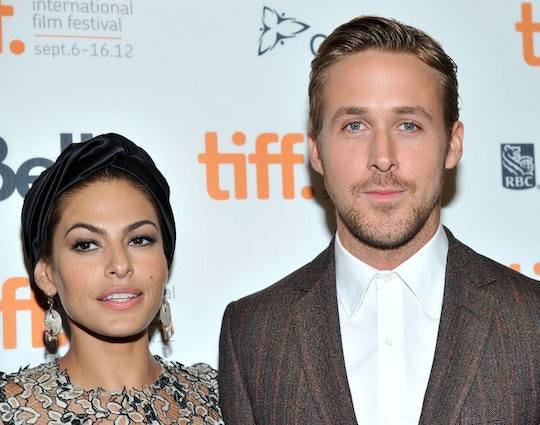 One of your favorite celebrity families is growing their brood by one... and no, not that way. Earlier this week, Eva Mendes revealed her family's newest "member," a beautiful and relaxed-looking dog, was officially adopted and brought to his forever home. And, TBH, he might just be the cutest one of the bunch.

Mendes took to Instagram yesterday to share a sweet photo of herself and her family's new dog on the beach together. "Meet Lucho. The newest member of our family. We adopted him from this amazing agency called Friends for Life Rescue Network @fflrescuenetwork," she began on Instagram, continuing to share why she believes adoption is so important for animal welfare, and why you should consider adopting, instead of purchasing, a pet from a breeder.

"If you’re looking for a fluffy family member, adoption is a great option," she concluded. "So many little dudes out there needing a home. If you’re not able to have a pet but love animals, you can donate to this nonprofit. All donations are tax deductible. Your donation helps keep animals off the streets and out of shelters where they euthanize."

The adorable Lucho appears to be a grey Doberman, which Mendes confirmed in the comment section of the post. "A beautiful dawn Doberman. We have a red. Dobies are the absolute best," one follower commented on the photo, to which Mendes replied: "Yes! They’re so sweet! I never knew!"

As for the new dog's namesake, it's possible that it's a nod to Lucho González, an Argentinian soccer player, though Mendes has not yet confirmed where the inspiration came from.

Lucho will undoubtedly be showered with love with his new family. Between Mendes, hubby Ryan Gosling, and their two daughters together — 4-year-old Esmeralda and 3-year-old Amada Lee — he's definitely going to be one happy and loved pup.

Mendes doesn't often talk about her personal or family life, but every once in awhile she does share a lovely update. Before Lucho's announcement, Mendes shared in a rare interview with Women's Health that having a family wasn't always on the radar, but that all changed when she met Gosling.

"[Having kids] was the furthest thing from my mind," she told the magazine earlier this year. “[Then] Ryan Gosling happened. I mean, falling in love with him. Then it made sense for me to have… not kids, but his kids. It was very specific to him."

As if all of that weren't sweet enough, Gosling has also echoed the "soulmate" sentiment, sharing with People back in 2015 after their first daughter was born that he knew he was meant to be with Mendes. “I know that I’m with the person I’m supposed to be with,” he told People at the time.

Whether they're adding babies to their family or more furry friends to their sweet brood, it's clear that Eva Mendes and Ryan Gosling are genuinely happy together, and are probably looking forward to more family walks on the beach with their adorable pup Lucho in tow, of course.