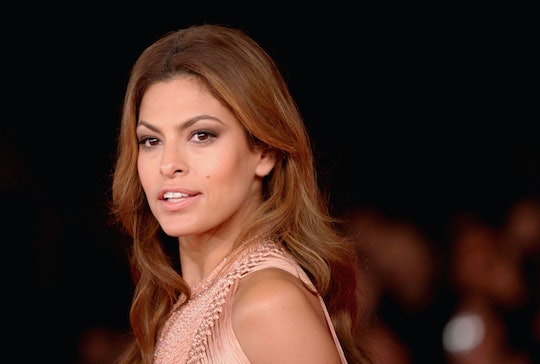 Five years after the birth of her first child, one actor is getting real about the challenges, and surprises, that parenthood brings. In a recent interview on Kelly Clarkson's new daytime talk show, Eva Mendes said being a stay-at-home mom was a harder job than acting. What's more the actor, who has two children with Ryan Gosling, claimed nobody had really warned her about just how much harder it would be.

"People are so sweet," Mendes told Clarkson earlier this week during an episode of The Kelly Clarkson Show. "They really try to warn you, prep you, when you're pregnant, but nobody can prep you [for how difficult parenting can be]. Nobody." When asked by Clarkson when she'd realized that, in putting her career as an actor on hold to be a stay-at-home parent, she'd chosen "the way harder job," Mendes was quick to answer with, "Every day."

"And nobody told me it was gonna really be a job," Mendes said. "And a job that I needed an incredible amount of skill for, in different areas." The 45-year-old mother of two then went on to list some of the many jobs that parenting 5-year-old Esmeralda and 3-year-old Amada had required she step into over the years. "A chauffeur, a cook, a personal assistant to an abusive boss," she joked.

"In any other profession, you'd need to take a test or pass tests," Mendes continued in reference to parenthood. "The only test I had to pass was a pregnancy test. That doesn't seem fair, right?"

But while Mendes has reportedly mastered a variety of different skills and jobs for her children, she noted that they'd yet to express much gratitude for all her hard work. "They're not grateful," she told Clarkson, who, like Mendes, has both a 5 year old and a 3 year old. "Do they get grateful? Does that happen at some point?" Mendes asked the show's in-studio audience.

Like many parents, however, there's one aspect of parenting that Mendes said she finds harder than the rest. "Hardest part, hands down, is the amount of snacks I have to carry with me all day long," she said. "You need variation, you need variety. They like something different. And you need to keep it fresh, because [if you don't] then they're like, 'nah.'"

Although Mendes noted that long car rides were "the worst" when it came to snacks, she said she'd been surprised to learn that even quick trips around town required snacks. "Even going to the market. We're going to the market but I need to take food in the car to go to the market," she said.

Mendes later joked to Clarkson that she and Gosling both had a pretty "controlling" style of parenting. "I heard of the term helicopter parenting," she said, referencing a style of child rearing that Dictionary.com has defined as overprotective parents who discourage independence by being too involved or hovering over their children. "I'm like, well what else are we supposed to do they're like this big?" she said, gesturing to about knee height. "We have to be on top of them every second ... The stakes are really high, so, yeah, I'm a helicopter parent."

While Mendes is a stay-at-home mom now, she reportedly hasn't always see herself taking on the role of mom. "It was the furthest thing from my mind," Mendes said of motherhood in an April interview with Women's Health. So just what happened to launch Mendes into a life with two children?

"Ryan Gosling happened," Mendes told the magazine. "I mean, falling in love with him. Then it made sense for me to have…not kids, but his kids. It was very specific to him."

More Like This
Reese Witherspoon’s Son Deacon Is Officially An Actor & Is Working With One Of His Mom's Besties
Dr. Jill Biden Just Delivered Some Frank, But Powerful, Advice On Motherhood
Khloé Kardashian Has Welcomed Baby #2 Via Surrogate & Is Keeping The Name A Secret
Kaavia James Obviously Had A Shady Response To Letting Her Mom Be Elsa From Frozen