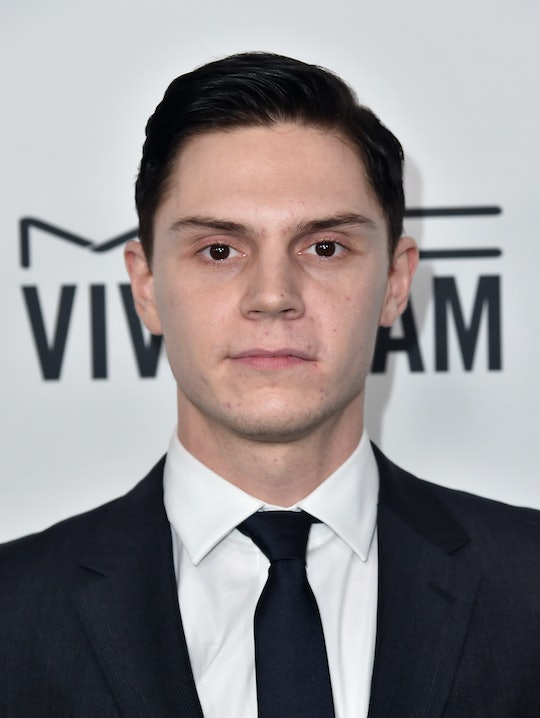 Well, that's disappointing. After taking five episodes to show up in the first place, Evan Peters quickly met his demise on American Horror Story – twice. His fans may have been counting down the days until he appeared in Season 6, but their hopes were dashed almost as soon as Peters popped up on screen. Then he was back, but gone again just as quickly. That's right, Evan Peters died on AHS: Roanoke for the second time in Episode 6, but this death feels like it could be a lot more permanent.

When Peters first appeared, he was playing a character in the reenactment portion of the show: a former owner of the house from the 1700s named Edward Philippe Mott. He was rouged, he had an elaborate wig, and his accent was delightfully ridiculous, but unfortunately his screen time was on the limited side. Shortly after his highly anticipated debut, Edward was dragged out of the house and killed in the middle of the night. And even though he returned as a ghost later on in the episode, it was still a bummer for him to be killed so quickly. However, Peters was back in the next episode as the actor who played Edward, a young man named Rory. But, unfortunately, Rory didn't last much longer than Edward did.

Rory's new wife Audrey (played by Sarah Paulson, who was previously Reenactment Shelby) received the scare of her life in the bathroom of the Roanoke house when the Piggy Man appeared behind her. Everyone assumed it was just the producers creating drama, but Rory didn't hesitate going to investigate. However, instead of the Piggy Man he found another threat waiting for him: the killer nurses who liked to spell out the word MURDER using the initials of their victims. Back when they were alive, they only got as far as MURDE. Lucky for them, Rory's name began with an R.

Rory's death came just as abruptly as Edward's did. Though Return to Roanoke: Three Days in Hell reveals that every person in the house (except for one, still unnamed) dies, it was still shocking to see someone go so soon. And particularly for that person to be Peters, who has been unusually absent from AHS this year. It's likely that other projects kept him from taking as big of a part as he usually does, but he's such a mainstay of the series that his absence has been felt.

But there's no way of knowing quite yet if this is really the end of Rory. While being killed twice in as many episodes feels pretty permanent, this is still AHS – almost everyone comes back as a ghost at some point. Maybe this isn't the last time fans will see Rory. Fingers crossed, right?