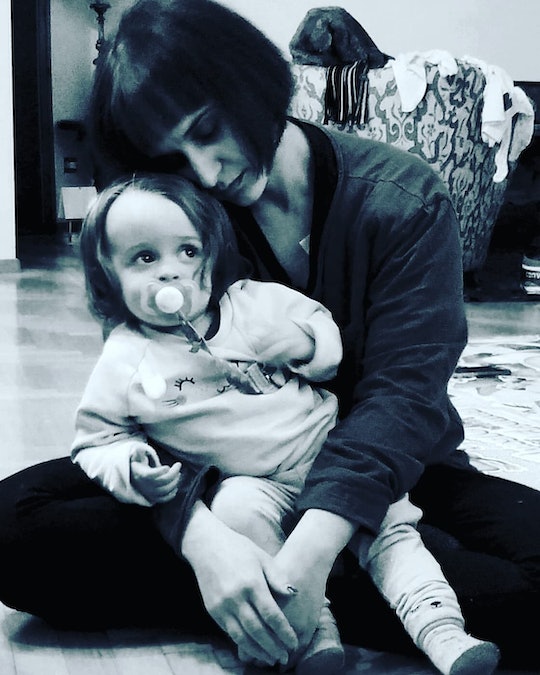 I Thought I Would Recover Easily From A C-Section. I Was Wrong.

I always had planned on having an unmedicated delivery. From the moment I found out I was pregnant with our now 16-month-old daughter, Lucia Antonia, it was a drug-free, vaginal delivery all the way. Nothing was going to change my mind.

But at my last check up around two weeks before my daughter’s due date, my doctor calmly told me that the umbilical cord was wrapped around her neck and suggested we schedule a C-section. Though I was not thrilled with the idea, I wanted to do what was best and safest for my daughter.

My own mother had given birth to me via C-section and assured me that everything would be fine. It was easy, painless, and within two days, she was back to her normal self, running around. My mother — 35 at the age of my birth — was taller and heavier than I was, so when she told me how easy her recovery was, I assumed for me, 29 and slimmer, it would be a cinch. I imagined myself a week after birth getting back to my usual activities.

The cesarean itself went as smoothly as one could hope. I was given anesthesia, didn’t feel a thing, and remember the exact moment my daughter was presented to me, eyes wide open, in the moment after birth. It was perfect.

The recovery on the other hand…

For the first six hours of my daughter’s life, I could not feel my legs, but that was to be expected. The next day, I was encouraged to try to get up and walk around with the assistance of a girdle, holding in all my extra belly fat, while still being hooked up to an IV. I remember struggling to sit up in the hospital bed. As I attempted my first few steps, I felt a burning sensation alight along each notched line of stitches.

Another mom who had a C-section the same day as me was running around like a firecracker.

I couldn’t sit back on the bed without the assistance of my husband or a nurse. I couldn’t bend down to get my daughter in her bassinet. When I first started trying to breastfeed, lying in bed, the weight of my daughter on my side was excruciating, in addition to the pain of breastfeeding. When I went to the toilet, it took me minutes to sit down and get up. One day while trying to walk around the room, I fell and needed my husband and mother to help pick me up.

Meanwhile, another mom who had a C-section the same day as me was running around like a firecracker. Once again, older and bigger than I was. Why? Why wasn’t I running around, too? I had assumed that being young, thin and in good shape, I would be up and running in no time.

This was not my experience and I shouldn’t have just assumed it would be. Every C-section is different.

On top of everything, I was not aware that until you have a bowel movement or pass air, that I would not be discharged from the hospital. A cesarean is major abdominal surgery and they need to make sure your intestines are back up and running. I was not able to eat because of this and spent an extra day in the hospital. When I was finally able to go home after five days, walking up the steps in our three-story house was akin to climbing a mountain. When I was asleep and my daughter would wake up needing to be nursed, I rushed to sit up, but this just caused more pain. I could feel my scars knitting back together, fiber by fiber. I couldn’t go to the bathroom naturally, because any time I would push, it would cause extreme pain, so I needed to use enemas for around two weeks.

This, and I had no real complications from my C-section.

I am tired of the assumption that women who have given birth via C-section had it easy because they didn’t really give birth. It’s not only offensive and insulting to me, but to my daughter as well.

I gave birth to my daughter the way that she needed me to give birth to her. This made her arrival safe. That’s all that counts. I gave birth just as much as any woman and I have the war scars, and beautiful baby girl, to prove it.