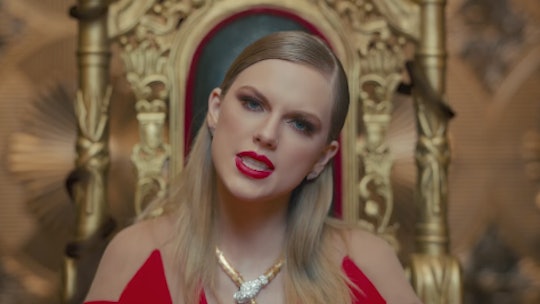 Every Celebrity Referenced In 'Reputation,' Because You're Bound To Miss One

It's here, T. Swift fans. Taylor Swift's released her much anticipated Reputation album unto the world late Thursday night, and unsurprisingly, it's already getting a lot of attention. For one thing, there's a ton of celebrities referenced in Reputation, so that's sure to cause a lot of drama and some possible clap backs over the next few weeks. But bad press is still press when it comes to marketing a new album, and considering some of the lyrics and references in videos for early single releases from the project, I don't think Taylor minds much if certain fellow celebrities have beef with her. In fact, I think she's counting on it.

The number of celebrities Swift references on Reputation is definitely notable. Although these nods to feuds and relationships with fellow stars grab fans' attention, some critics think it's for the worse. "Taylor works best when she’s not trying to seduce or blatantly call out one of her celebrity rivals," The Irish Times says. But Google "Taylor Swift" and any number of her "rivals," and you'll see countless articles, fan blogs, and Tweets about the feuds, so, clearly she's doing something right.

Anyway, let's take a look at all those references, and see just what Taylor has to say about them on Reputation.

It's certainly no secret that Swift and Kanye West are not friends, or, they're not anymore. West infamously showed up on stage when Swift won the 2009 MTV Video Music award for best female video and said that Beyoncé’s "Single Ladies" should have been the winner, according to The Guardian. Specifically, he famously said, "Beyoncé had one of the best videos of all time," during Swift's acceptance speech. He eventually apologized, and they seemed OK for a little while, but it didn't last.

Fans and reviewers quickly decided that "Look What You Made Me Do," the first single released from the album, is about West. They also think she also sings about various feuds and grudges with West on "End Game."

And critics think, "This Is Why We Can’t Have Nice Things” "directly addresses the Kanye situation," according to The Washington Post. That's three out of the 15 tracks that are probably or definitely about West. So, yea, that feud is far from over.

In “Don’t Blame Me," Swift sings, "I’ve been breaking hearts a long time and toying with them older guys.” This could be a vague reference to John Mayer, who is 12 years older than she is and who she was once in a relationship with.

The song “Gorgeous” is rumored to be about Swift's current boyfriend, actor Joe Alwyn (though neither of them have confirmed the relationship). She reportedly told listeners during one of her “secret sessions” — where Swift played the Reputation album early for super fans — that the song is specifically about Alwyn, according to People.

“Dancing With Our Hands Tied” also mentions someone who is 25 years old, which was Alwyn’s age when he and Swift met, according to The Washington Post. There are other love songs on the album too, but they don't seem to be as obvious in their dedication to Taylor's current beau.

“Getaway Car” could be about Swift's rumored short relationship with actor Tom Hiddleston — a relationship that seemed doomed from the start because of intense press speculation. Swift and Hiddleston's relationship definitely drummed up a media frenzy, and the line "A circus ain’t a love story, and now we’re both sorry" could be in reference to that.

Plus, the song "King of My Heart” includes the line "All the boys in their expensive cars with their Range Rovers and their Jaguars/Never took me quite where you do," which fans find *incredibly* interesting since Swift was seen with Hiddleston in a Jaguar, according to The Washington Post. It could just be a coincidence, but with Taylor, every lyric has meaning.

Swift was also once photographed with ex-boyfriend Calvin Harris in a Range Rover, according to The Daily Mail. So that line from “King of My Heart” could be referencing him as well.

In “This Is Why We Can’t Have Nice Things," Swift sings, "It was so nice throwing big parties, jump into the pool from the balcony/Everyone swimming in a champagne sea,” which could be about her famous Fourth of July parties, according to The Washington Post.

But later Swift sings, “Why’d you have to rain on my parade?" And not long after her July 4 party in 2016, Kim Kardashian West leaked a recording of a conversation between Swift and Kim's husband, Kayne, that made it seem like Swift is a liar. Parts of “End Game” could be about Kardashian West as well. Plus, some people think “Look What You Made Me Do” references Taylor's feud not just with West, but with Kim too.

A line in "Look What You Made Me Do" could be about Katy Perry, too, according to Elle. Swift sings, "The world moves on, another day, another drama, drama/But not for me, not for me, all I think about is karma."

Karma was a big part of Perry's song "Swish Swish," which may have been meant to diss Swift, Elle reported. In addition, the "Look What You Made Me Do" video certainly seems to reference Perry. But a feud with Perry isn't as obviously referenced on Reputation as the Kimye feud is.

You get the picture. Reputation is chock full of celebrity references, and Swift is not shying away from singing about the issues she's had with fellow stars. Listeners will have to decide for themselves exactly who Taylor is singing about in each song, but as long as they're talking about the project, Taylor's done her job as a media-savvy entertainer.

More Like This
Celine Dion Shares She's Been Diagnosed With A Rare Neurological Disorder
“Dominick The Donkey” Is The Annoying Christmas Tradition I Can't Live Without
Elon Musk Shares New Photos Of Son, X, With His Own Twitter Badge
Mariah Carey Says She Has Never Called Herself The “Queen Of Christmas”