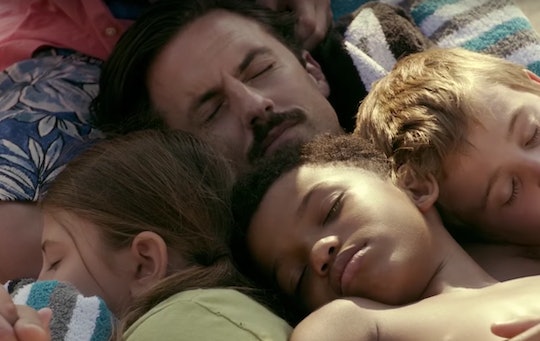 New Report Reveals Each State Has A Favorite TV Dad & Yup, Jack Pearson Is One Of 'Em

It's that time of year again. This Sunday, June 16, is the day we honor the fathers who raised us, and the fathers who entertained us on TV (OK, maybe they don't get a shout-out in the festivities, but they should). In fact, according to a new report, every state has a favorite TV dad, and the results probably won't totally shock you.

The analysts at HowToWatch teamed up to determine who is America's favorite TV dad, and as it turns out, there are many. To conduct the research, researchers evaluated IMBd results utilizing search data over the last year from Google Trends, they shared in a press release.

The results? Well, Homer Simpson fromThe Simpsons and Jack Pearson from This Is Us reigned supreme as America's favorite TV dads, ranking in multiple states each. (Surprising? Or not?) In Florida, Indiana, Michigan, Oklahoma, and Texas, Gomez Addams from The Addams Family was named the favorite TV dad, while California chose Danny Tanner from Full House (predictable, it is home to San Francisco, after all). Nebraska chose Friday Night Lights dad Coach Taylor, while Maine chose Richard Gilmore from Gilmore Girls.

Though it's interesting to see which dads, and shows, are favorites across the United States, it's also interesting to note which demographics resonate with a certain style of parenting. It can't mean nothing that the mid-Atlantic states all agreed, can it?

If it's a little hard to determine who is who based on the image, here are the official rankings by state, and the show that each dad is from.

So this Father's Day, make time to commemorate not only the father or father-figure who loved and raised you, but your favorite TV dad, the one who is a master of dad jokes, white New Balances, and every other dad trope that exists. Truly, it's a day to honor them all.