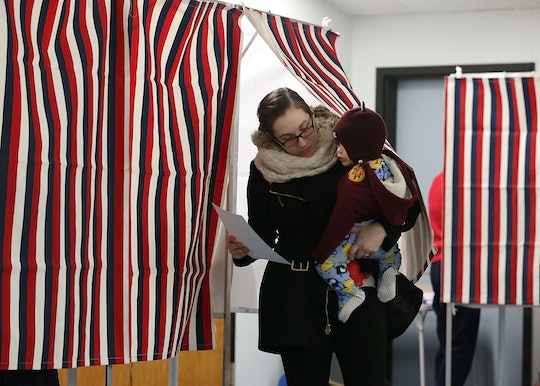 Not Registered To Vote? Here's Every State With Same Day Voter Registration

As important as the midterm elections are, life doesn't stop to facilitate your civic duty. Many people may miss registration deadlines and fear they won't be able to vote. But there are many states with same day voter registration, which means you still have time to make sure your voice is heard in this upcoming election. So, get out there and do the dang thing.

Many states have registration deadlines that fall weeks before Election Day. Unfortunately, that leaves voters with a tendency to procrastinate — or with a busy life, unable to participate. With these voters in mind, 15 states and the District of Columbia offer same day registration, sometimes referred to as Election Day registration, for state residents, according to the National Conference of State Legislatures. They are able to register to vote and cast their ballots in one visit to the polls.

According to Demos, California, Colorado, Connecticut, the District of Columbia, Hawaii, Idaho, Illinois, Iowa, Maine, Minnesota, Montana, New Hampshire, Utah, Vermont, Wisconsin, and Wyoming all allow voters to register up to and including Election Day.

Additionally, North Carolina and Maryland offer same day registration during some of their early voting periods, but not on Election Day, as noted by Demos. Washington state has passed same day voting legislation, but it will not go into effect until June 2019.

Voting deadlines vary by state, usually ranging between eight and 30 days prior to Election Day. For a complete list of state deadlines, visit Vote.org.

For residents of states with same day registration, the process is fairly simple. Be sure to bring a proof of residence that is accepted in your state. All states accept an in-state driver's license, but some will also accept other forms, such as a paycheck or utility bill, according to Business Insider. You'll also need a voter ID to verify that you are who you say you are. While some states require a photo ID, others will accept forms of ID without photos.

Ballotpedia listed a number of benefits to same day registration, not least of which is increased voter turnout. States that offer same day registration have regularly ranked among the highest in voter participation, with an average of five percentage points higher than those that don't, according to the NCSL. It also eliminates arbitrary deadlines for registration at times when voters are most engaged, helps voters who have lapsed in registration due to relocation or moving, and empowers low-income, minority, and young voters. These two demographics are the most likely to have relocated without updating their registration and therefore suffer the most when registration closes.

Midterm elections are incredibly important. This year's midterms will be crucial for state-level policy, as Vox reported. The outcomes could determine whether or not Roe v. Wade is upheld, impact the future of Medicaid expansion in some states, and affect other issues such as education, taxes, and labor rights. All of these are reason enough to make sure your vote is heard.

If you live in a state that offers same day registration, you have no excuse to miss out on Election Day this year. So, grab your proof of residence and ID, and head to the polls.