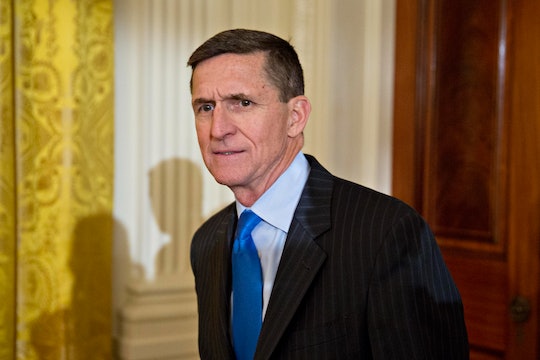 In case you have somehow avoided all news outlets on Friday, allow me to share one of the top headlines of the day: Michael Flynn has pleaded guilty to lying to the Federal Bureau of Investigation (FBI) about conversations with the Russian ambassador last December. He is just the latest in a list of people charged in the Russia investigation so far — and because Flynn was a key figure in President Donald Trump’s campaign, transition to the presidency, and in the early days of his administration, the special counsel investigation of Russian interference in the 2016 election now definitely includes Trump’s inner circle. And it could mean very bad things for other members of Trump's team, or for Trump himself. (Michael Flynn's representative did not immediately respond to Romper's request for comment.)

The charges against Flynn are a sign that he is cooperating with the investigation by the special counsel, Robert S. Mueller III, according to The New York Times. A statement released by Mueller’s team Friday didn't specifically say what information Flynn provided the government as part of the plea deal, but sources told ABC News that Flynn has decided to assist investigators. The information that Flynn might provide as part of a deal could help advance the overall investigation into Russian interference in the election.

Here is Flynn's statement on the situation, according to USA Today:

After over 33 years of military service to our country, including nearly five years in combat away from my family, and then my decision to continue to serve the United States, it has been extraordinarily painful to endure these many months of false accusations of "treason" and other outrageous acts. Such false accusations are contrary to everything I have ever done and stood for. But I recognize that the actions I acknowledged in court today were wrong, and, through my faith in God, I am working to set things right. My guilty plea and agreement to cooperate with the Special Counsel's Office reflect a decision I made in the best interests of my family and of our country. I accept full responsibility for my actions.

George Papadopoulos, Paul Manafort, and Rick Gates have also been charged, Newsweek reported. But prior to Flynn's guilty plea, no one else who'd actually been a part of the administration had been charged in the investigation — only individuals connected to the Trump presidential campaign.

Flynn admitted to one count of knowingly making "false, fictitious and fraudulent statements," according to the BBC. Flynn was previously Trump's national security adviser, but resigned in Feburary after he reportedly misled the White House about meeting the Russian ambassador, Sergey Kislyak, before Trump took office.

George Papadopoulos was the first aide in the Trump campaign to plead guilty in the investigation into ties between the president’s team and the Russian government, according to The New York Times. He was a foreign policy consultant Trump once called an "excellent guy," and the White House tried to downplay his role in the campaign after he pleaded guilty to lying to the FBI in October.

Former campaign chairman Paul Manafort was also charged in October in the investigation by Mueller, according to The Washington Post.

The charges against Manafort include: conspiracy against the United States, conspiracy to launder money, false statements, acting as an unregistered agent as a foreign principal, and making misleading statements in violation of the Foreign Agent Registration Act, according to Wired. He also faces seven counts of failing to file reports of foreign bank and financial accounts.

That's a whopping 12 charges against one person connected to the Trump campaign. Manafort pleaded not guilty to the charges, according to The Guardian.

Finally, Rick Gates — Manafort's business partner — was also charged in October, according to The Washington Post. He was also indicted on those 12 charges. But the indictments against them don't mention Trump or Russian interference in the election, The Guardian reported.

As the Mueller investigation continues, many are wondering who may be charged next. There are reports that people in the Trump administration, as well as members of Trump's own family, may end up in the crosshairs.

ABC News' Brian Ross reported that Flynn has "promised full cooperation" with Mueller, CNBC reported. Flynn is "prepared to testify against President Trump, against members of the Trump family and others in the White House." Ross reportedly went on to say of Flynn, according to CNBC:

He is prepared to testify that President Trump, as a candidate, Donald Trump, ordered and directed him to make contact with the Russians, which contradicts all that Donald Trump has said at this point.

Which could be very, very bad for the president and his administration.

It appears that the Mueller investigation isn't ending anytime soon. It's anyone's guess who may be charged in the Russia investigation next, but a lot of people in the White House are probably very nervous today.