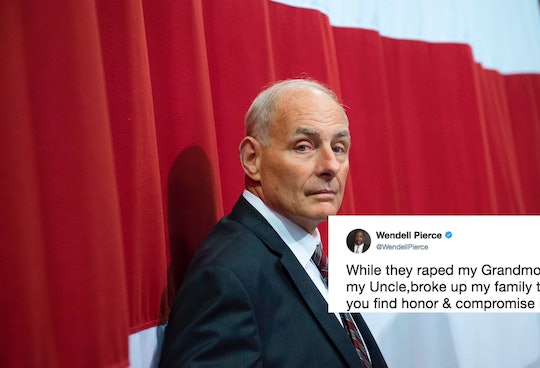 The Civil War has come up frequently in the news lately, thanks to reinvigorated discussions about whether, in today's more progressive times, holding onto statues and names that continue to honor Confederate leaders remains appropriate. Many in the United States have landed on "no," and change has slowly been making its way through cities. But on Monday night, during an interview with Fox News, White House Chief of Staff John Kelly explained why he believed that change was a mistake, saying the Civil War happened due to a "lack of ... compromise" and that we needed to pay homage to our history. Many people have reacted to his interview, but this one harsh tweet about Kelly's Civil War comments hits the nail on the head.

First, however, a quick recap on exactly what Kelly said during his Fox News interview. According to CNN, he started by praising Robert E. Lee as an "honorable man" before saying:

The lack of an ability to compromise led to the Civil War, and men and women of good faith on both sides made their stand where their conscience had them make their stand.

But the thing is, the Civil War was never about an inability to compromise. It was about slavery. And actor Wendell Pierce made that crystal clear when he tweeted on Tuesday in response to Kelly's comments:

The thing is, people have been trying to defend the Confederacy from criticism for a while now using explanations similar to Kelly's. When people try and paint Confederate leaders as honorable, they say men like Lee were mainly fighting for their "own right of self-determination," as one writer wrote for the National Review in 2015.

They claim that the valor Confederate soldiers showed in their fighting and the devastation the South faced after the war ended make it OK — indeed, necessary and right — to honor those leaders. Those who defend the appropriateness of Confederate statues and leaders say that we must look at history through a lens: that what we consider unacceptable now was more acceptable then.

But responses like Price's help cut straight to the heart of all those noisy explanations: there is no honor and no valor in defending slavery. There is no way to excuse the atrocities that were committed against black people in the United States prior to the Civil War (and long after it, for that matter). And to rank the importance of honoring one group's bravery in war and dedication to their comrades above the importance of acknowledging the rights and the painful history of another group means to continue perpetuating white supremacy. That is, essentially, what it comes down to.

The Civil War had nothing to do with compromising. When it comes to slavery and rape and lynching, there can never be a compromise. Those with Confederate soldiers in their history can acknowledge a difficult relationship with those people, as the ancestors of Stonewall Jackson did when they wrote in an open letter published in Slate calling for the removal of their ancestor's statue in Richmond, Virginia. "We understand justice very differently from our grandfather’s grandfather," they wrote, continuing:

We have learned how thoughtful and loving he was toward his family. But we cannot ignore his decision to own slaves, his decision to go to war for the Confederacy, and, ultimately, the fact that he was a white man fighting on the side of white supremacy.

It can be easy for people to get distracted by messages of loyalty and state pride and bravery when it comes to discussions about statues that honor Confederate leaders. But as Pierce's staightforward message reminds us, that's never what it was about. Not then, and not now. It was about slavery and oppression, and to pretend otherwise is to ignore the very real, very brutal, and very racist reality Confederate soldiers fought for.