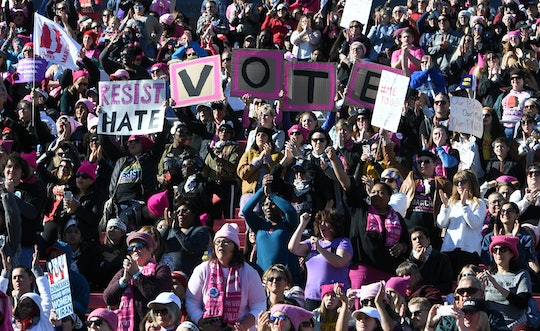 Here's Proof Donald Trump Doesn't Get The Women's March — Like, At All

When President Trump wants to express an opinion about something, he takes to Twitter. So it should be no surprise that everything Donald Trump has said about the Women’s March would show up on his over-active account. To add to that, his comments show that he’s completely missing the point of the effort and views it as less than threatening.

The first Women’s March was held in 2017, the day after Trump was inaugurated into office. Soon after he won the 2016 election several people took to Facebook with the idea to march in protest of some of Trump’s attitudes towards women, according to McClatchy DC. They consolidated their efforts... and that's how the Women’s March on Washington was born, the effort’s Facebook page states.

Trump didn’t comment on the first march, on Jan. 22, 2017, in the days leading up to it, nor did he say anything the day it took place. Instead, he waited until the day after to address it on Twitter (shocker), saying: “Watched protests yesterday but was under the impression that we just had an election. Why didn’t these people vote? Celebs hurt cause badly.” The comment was particularly tone-deaf considering that women of color and marginalized women – many of whom felt represented by the march – were proven to have overwhelmingly voted for Hillary Clinton in the election, according to Quartz.

Trump also lost the popular vote by 2.86 million ballots, according to The Independent, so his assumption that these women didn’t vote just seemed particularly out of left field.

Later that morning Trump took to Twitter again with more thoughts on the historic march. “Peaceful protests are a hallmark of our democracy. Even if I don’t always agree, I recognize the rights of people to express their views,” the president wrote. At least that tweet seemed somewhat neutral, but the fact that the president declined to address or comment on what women were trying to tell him made everything he had to say feel like a de facto dismissal.

The following year Trump was on Twitter again, this time while the march was under way. But he took the opportunity to comment on his own administration, couching the self-praise in support of the march. In fact, based on what Trump wrote, he seemed to believe the Women's March was a celebration. He could not have been further from the truth.

“Beautiful weather all over our great country, a perfect day for all Women to March. Get out there now to celebrate the historic milestones and unprecedented economic success and wealth creation that has taken place over the last 12 months. Lowest female unemployment in 18 years!” he wrote.

Unfortunately for Trump, the marches aren’t going away anytime soon. We’ll get to see what Trump’s thoughts are on them again this year when women take to the streets on Saturday, Jan. 19.

In 2018 Hillary Clinton used the opportunity to encourage women to get out there and vote:

One marcher told NPR that she hadn’t ever taken an interest in politics until now. “I really in the past was kind of like, ‘Eh, the right person will win, I’m sure’. I rarely voted in either local or midterm and things like that. Now I really try to vote on all of those,” she said.

That activism was on display during the 2018 midterms when women swung remarkably to the democratic side, according to NPR.

The 2019 march is scheduled for Jan. 19. To find a march in your vicinity — and they’re scheduled all over the world — visit the schedule on the Women’s March website.