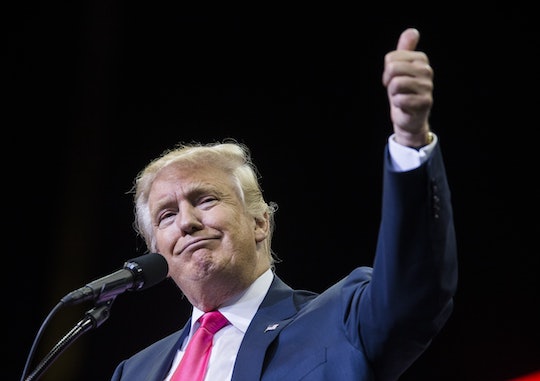 Everything Donald Trump Has Said About Vaccines Is Silly & Dangerous

Donald Trump isn't exactly known for knowing stuff. He goes with his gut, his feelings. It's what many of his supporters love about him. But when it comes to the health and safety of kids, the GOP nominee for president might want to double-check his facts. Everything Donald Trump has said about vaccines is wrong and perpetuates the anti-vaxxer myth that vaccines cause autism.

But that hasn't stopped plenty of parents to say their experience tells them otherwise. And that's created a whole movement of parents who aren't vaccinating their kids, the result of which has been the reemergence of diseases like measles, mumps, whopping cough, and chicken pox, according to TIME. That's especially scary for parents with kids who physically can't take getting immunized due to an autoimmune disease or other illness, like cancer.

Trump is in a unique position to influence the decisions parents make to protect both their children and everyone else's. And none of his comments appear to be based on any specific scientific evidence, just, again, on what he feels is true.

Here's what Trump said at the CNN Republican Presidential Debate

"Autism has become an epidemic. Twenty-five years ago, 35 years ago, you look at the statistics, not even close. It has gotten totally out of control," Trump said. "I am totally in favor of vaccines. But I want smaller doses over a longer period of time. Same exact amount, but you take this little beautiful baby, and you pump—I mean, it looks just like it's meant for a horse, not for a child, and we've had so many instances, people that work for me."

2. Yet Again, That They're Not Horses

4. When Did Doctors Lie Now?

6. He Says Parents With Autistic Children Thank Him

7. He Has His Own Theory

According to Raw Story, here's what Trump said about vaccines on Fox News in 2012,

I’ve gotten to be pretty familiar with the subject. You know, I have a theory — and it’s a theory that some people believe in — and that’s the vaccinations. We never had anything like this. This is now an epidemic. It’s way, way up over the past 10 years. It’s way up over the past two years. And, you know, when you take a little baby that weighs like 12 pounds into a doctor’s office and they pump them with many, many simultaneous vaccinations — I’m all for vaccinations, but I think when you add all of these vaccinations together and then two months later the baby is so different then lots of different things have happened. I really — I’ve known cases.

8. Trump Says People Who Believe In Vaccines Are "Nay-sayers"

9. And Scientists & Doctors Are Just "Shills"

Basing your medical advice for American parents on "your friend's son" and conspiracy theories is reckless. I hope Trump re-thinks pushing his wild theories until he gets a bit more input from medical experts.