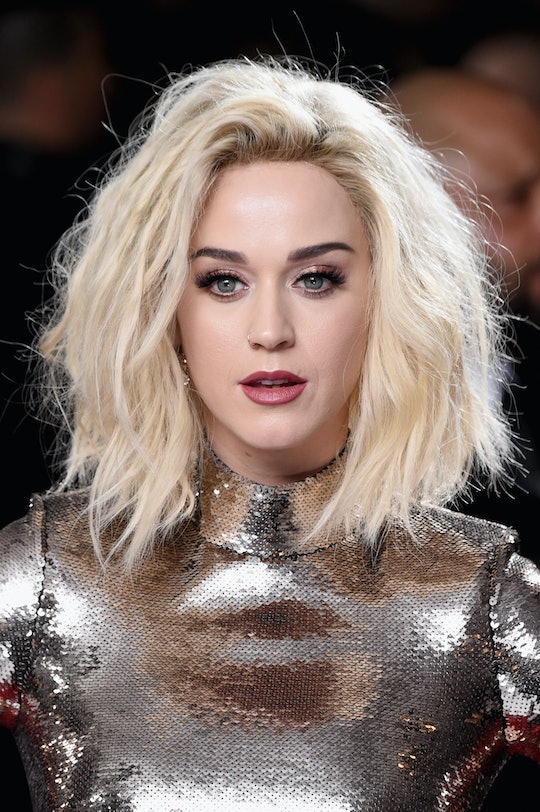 So Katy Perry arrived at the red carpet wearing a very specific look. It was a shimmery mock turtleneck top with a drop waist than ended in a feathery long skirt. Obviously, this provoked some comments, not all of them necessarily complimentary but some of which were pretty darn funny. Here is everything Katy Perry looks like at the 2017 Grammys, according to Twitter.

Though she got a lot of funny responses to her unique Tom Ford look, she was definitely feeling herself and for that I have to say "Yas, Queen." While yes, it was a bit of an odd choice, Perry isn't exactly known for her sedate, conservative red carpet looks. This is a woman who wears bras made out of candy and, you know, nothing else. She is a beautiful fashion pioneer and honestly would we want her any other way? That being said, yeah this is a weird dress.

The most common comparison was pretty obvious. Yes, Perry's dress did bare a striking resemblance to the animated feather duster from Disney's Beauty and the Beast. Personally, I kind of thought her dress made her look like a literal muppet. I love Perry, but this was not my favorite thing she's ever worn. I do kind of dig the blonde hair though, even if it's a little crazy.

But this was far from the only comparison made about her look at the Grammys. One astute observer said thought she looked like Mother Goose, which was kind of apt.

Others compared her to other interesting characters throughout the years, not just cartoon characters.

Others conjectured that Perry just didn't actually know what event she was going to tonight, and just threw on whatever.

And then, of course, she was compared to a scarecrow.

Granted, I don't really agree completely with some of these comparisons. For instance, I don't think she looks like an actual scarecrow. She's way too sparkly right now to be a scarecrow. She's a fuzzy glow-stick if anything. Maybe an upside-down lamp? Cheerleader pom-poms? Alright, alright, I'm done.

If we're honest, even if she does look like a feather duster, muppet, scarecrow, she looks absolutely amazing doing it. There are few humans in the world who can pull off an absurd blonde wig and even more absurd sparkly turtleneck that sort of falls, sacklike, into a dreadful feathery skirt. Katy Perry is one of those humans. So even though this is a truly silly outfit, Perry pulls it off the way only Perry can.