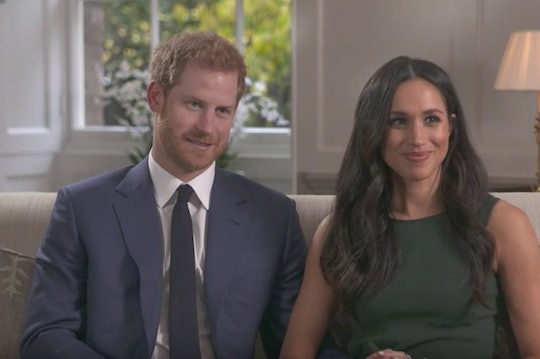 Everything We Know About Prince Harry & Meghan Markle's Wedding

Prince Harry is officially off the market. On Monday, Prince Harry announced that he and girlfriend, American actress Meghan Markle, were engaged to be married. While there were many tears shed by the women who grew up pining after the redheaded prince (ahem, anyone who grew up in the 1990s), there was a lot more happiness surrounding the fact that there is going to be a royal wedding within the next few months. Luckily, everything we know about Prince Harry and Meghan Markle's wedding will tide everyone over until the big day comes.

There is something just so exciting about a wedding and this royal wedding is no exception. It has been a while since the last royal wedding, when Prince Harry's older brother by two years, Prince William, married longtime girlfriend Kate Middleton in 2011 and became the Duke and Duchess of Cambridge. It was probably the only thing that your royal family obsessed aunt would talk about for months at the time.

But now, just six short years later, England's favorite "party boy," as tabloids used to call him, has finally settled down. And a new royal wedding will possibly command television screens and the rest of the world, for that matter, in due time. Luckily, that is a relatively short amount of time.

When The Clarence House announced the couple's engagement on Monday, it stated that Prince Harry and Markle would get married this upcoming spring.

But just one day later, The Clarence House announced that Prince Harry and Markle would be getting married in the month of May, likely after the Duchess of Cambridge gives birth to her third child, according to Elle. While the exact day of their wedding has yet to be determined, according to People, it is likely that it will be held on a week day, according to Elle (some people are holding out hope it will be a bank holiday and they can take the day off).

May is not necessarily be the most popular month to get married. There is an ancient superstition, according to Refinery 29, that getting married in May is "bad luck" and dates back to ancient Rome. An old saying even states "marry in May, rue the day," and according to Hello! Magazine, Prince Harry's ancestor, Queen Victoria, allegedly refused to let her children marry during the month.

But Prince Harry and Markle are clearly not subscribers of this superstition.

A Kensington Palace spokesman revealed, on Tuesday, that Prince Harry and Markle would be married at St. George's Chapel at Windsor Castle, according to People. The spokesman told People that Windsor Castle is a very special place for the couple, because they spent time there together throughout the past year.

In order to be married inside of the church, according to the BBC, Markle must be baptized into the Church of England and confirmed, which she will reportedly do by May. The church has already seen plenty of weddings in its time. According to the BBC, it is the same location where Prince Charles married wife Camila Parker-Bowles, or the Duchess of Cornwall, in 2005, and the weddings of two of Prince Harry's cousins.

This most exciting detail about the wedding is likely to be the one that is kept under wraps the most. But some people seem to have an indication of what Markle will (and won't) wear when she meets Prince Harry at the altar in just a number of months.

According to Good House Keeping, it is tradition that the bride dresses modestly and chooses a dress created by a British designer. But since Markle is a very untraditional bride for the Royal Family (she is an American divorcee, after all), this could go out the window. Last year, Markle told Glamour that her personal style for a wedding dress is "more relaxed," preferring ones that are "classic and simple with a modern twist." According to Town & Country, Markle's wedding dress won't look anything like her soon-to-be sister-in-law's. But at the end of the day, no matter what Markle picks, everyone knows it is going to be gorgeous.

With so many royal family members and celebrity friends, this guest list could be one for the ages. Queen Elizabeth, Harry's grandmother, will be attending the wedding, according to People and both of Markle's parents will also be in attendance, according to The Telegraph. Prince William's attendance is a given, and as previously stated, his wife will more than likely be there as well after she gives birth (hopefully with their newborn baby). It is likely, according to The Telegraph that there will be a role for Prince Harry's nephew and niece, Prince George and Princess Charlotte.

Aside from the obvious, there is a lot more speculation about who else might be attending. Before Markle was a Duchess-in-training, she was an actress in Hollywood and still has a lot of friends there — so it is more than likely we'll see a few famous faces attending the wedding, according to Entertainment Tonight. People like Serena Williams, Priyanka Chopra, and Markle's former co-stars from Suits are speculated to attend (although nothing is set in stone). Even the Obamas could score an invite to the wedding of 2018, according to Newsweek, due to their "amiable relations" with both princes. But a spokeswoman for Kensington Palace did tell Newsweek that invitations are not the priority right now and will be released "in due course."

Luckily, there is a chance that you don't have to be a royal or a celeb to peek inside their wedding. According to Town & Country, it is very possible that Prince Harry and Markle will allow their wedding to be televised, just as Prince William did in 2011 (but nothing has been confirmed).

With so many details that go into the wedding, so much hype surrounding it, and such short time to plan, it would be a little unfair if the rest of the world couldn't attend (with just their eyes, of course) what is sure to be the wedding of the year.