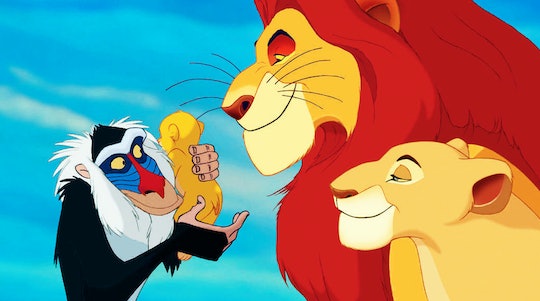 Everything We Know About The 'Lion King' Remake

It’s been 23 years since we first met Simba, Nala, Timon, and Pumbaa in the iconic ‘90s animated film The Lion King. And we’ll soon fall in the love with the whole gang again in Jon Favreau’s digital remake of the flick set to debut next year. Until now, many of the upcoming film’s details have been kept under wraps. But, at Disney's D23 Expo on Saturday, about 7,000 people got a sneak peek at what’s in store — and the crowd reportedly went wild. With so much excitement in the air and with a premiere day more than a year away, here’s everything we know about The Lion King remake because it can only be incredible.

As expected, anticipation is definitely high for the film's scheduled release on July 19, 2018 and film critics have had nothing but stellar comments to say about the short clip they saw at the expo. But, for the time being, the opening footage has not been released online. So, we'll have to take their word for it.

"We love this movie and we are working hard," Favreau said at Disney's D23 Expo, according to The Hollywood Reporter.

While it'll be many months until we can see what they've been working on in theaters, here's what we know to expect so far.

According to The Hollywood Reporter, Favreau's Lion King has an impressive lineup of vocally talented stars. Here are some of the voices you'll hear behind the beloved cast of animals:

As CinemaBlend reported, the upcoming film opens to "iconic tune" of "Circle of Life" and we'll see the same "fiery red sun rise over the plains of the African Savannah" on Pride Rock as Rafiki introduces young Simba to the kingdom.

It sounds familiar and already makes you feel nostalgic. And while we don't know if other classic songs — like "I Just Can't Wait To Be King" or "Hakuna Matata" — will make it into the final version of the movie, the first footage reveal was "close to a frame-for-frame recreation" to the original opening scene, according to IGN. So it's probably safe to assume that you'll be able to sing along to much of the new Lion King as well.

According to The Hollywood Reporter, in the new adaptation, the production team will be "incorporating virtual reality tools and techniques" and with cutting-edge technology, the African scenes we saw more than two decades ago will have a lifelike look to them.

"The footage [attendees saw] featured jaw-dropping photoreal shots of African landscapes, many types of animals (including elephants and, of course, lions)," according to The Hollywood Reporter.

Terri Schawrtz, an editor at IGN, wrote the released footage "perfectly captures the animated classic" and it knocked her "damn socks off." And while still have more than a year to wait to see it ourselves — and be blown away — this live-action retelling of The Lion King can only go down in history just like the first one.