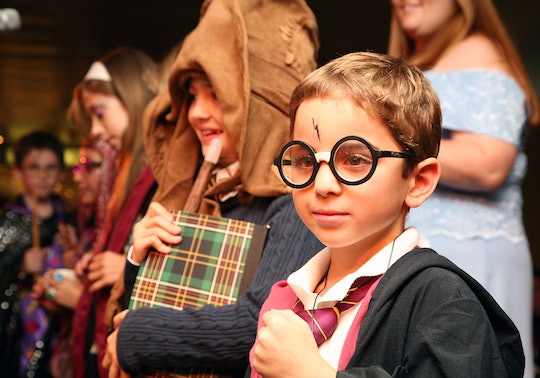 It's hard to believe that Harry Potter turned 20 this year. For the past two decades, the world has been clearly divided into two groups of people: Fans of Harry Potter and the Muggles who love them. And as if the 20th anniversary celebrations happening this year weren't enough to get your dress robes in a twist, fans of the beloved series have an even bigger treat coming this fall — three actually! Here's everything we know so far about the three new Harry Potter books.

As part of the 20-year anniversary of Harry Potter, the British Library will mount a massive exhibit of all things Potter, from original illustration sketches, handwritten drafts, and notes from author J.K. Rowling, to movie props and more. Harry Potter: A History of Magic opens in London, England on Oct. 20 and will run through February 2018. To coincide with the anniversary exhibition at the British Library, two new Harry Potter books will also be released on the same day.

In addition, the third book in the original series, Harry Potter and the Prisoner of Azkaban, is also getting some special treatment this fall. The third Harry Potter book is getting its own illustrated edition, joining two lavishly illustrated editions for the first two books in the series. Here's everything we know about all three books — so far.

Harry Potter: A History of Magic — The Book of the Exhibition

The first new Harry Potter book tied to the British Library exhibition will be Harry Potter: A History of Magic — The Book of the Exhibition. You can preorder the book through Amazon's UK store, and it will be available for Kindle, in addition the lush, full-color hardcover edition. Amazon has a very exciting description of what the book will include, giving both eager ticket holders and fans around the world a good idea of what the British Library exhibition will have in store:

Each chapter showcases a treasure trove of artifacts from the British Library and other collections around the world, beside exclusive manuscripts, sketches and illustrations from the Harry Potter archive. There's also a specially commissioned essay for each subject area by an expert, writer or cultural commentator, inspired by the contents of the exhibition...

Readers will be able to pore over ancient spell books, amazing illuminated scrolls that reveal the secret of the Elixir of Life, vials of dragon's blood, mandrake roots, painted centaurs and a genuine witch's broomstick, in a book that shows J.K. Rowling's magical inventions alongside their cultural and historical forebears.

Harry Potter — A Journey Through A History of Magic

The second Harry Potter book to be released in conjunction with the exhibition will be Harry Potter — A Journey Through A History of Magic. This book is also available for pre-order through Amazon UK, and will focus more on the Potter universe as opposed to specific items and commentary in the first book. This book feels more like a Hogwarts textbook, according to the book's description on Amazon:

This spellbinding book takes readers on a journey through the Hogwarts curriculum, including Herbology, Defence Against the Dark Arts, Astronomy, Divination and more. Discover the truth behind making the Philosopher's Stone, create your very own potion and uncover the secret of invisible ink. Learn all about the history of mandrake roots and dragons, discover what witches really used their brooms for, pore over incredible images of actual mermaids and read about real-life potions, astronomers and alchemists.

Harry Potter and the Prisoner of Azkaban: The Illustrated Edition

Once the orders are placed, Potter fans unfortunately have to wait until the middle of fall to get their hands on these new books — if only Time Turners were real, am I right?