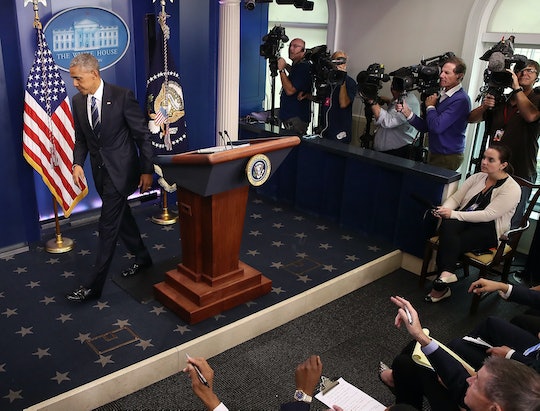 Everything You Need To Know About SCOTUS' Immigration Decision

Part of President Obama's lasting legacy will be his passion for immigration reform, though his actions have not gone unchallenged. His sweeping immigration initiatives were executed without approval from Congress, leading many critics to question their constitutionality. The case has gone to the Supreme Court, and the Court's decision was split 4-4. Here is everything you need to know about SCOTUS' immigration decision.

Since the death of former Supreme Court Justice Antonin Scalia, the court has passed on or been split on a number of cases. Republican Congressional representatives have continued to refuse to consider possible Supreme Court appointments made by the Obama administration, keeping the court an even number. This split is particularly influential because of the number of affected people it leaves in limbo. According to The New York Times, one of the initiatives in question halted the deportation of almost four million immigrants. Another program, called the Deferred Action for Parents of Americans and Lawful Permanent Residents (DAPA), proposed to protect the immigrant parents of legal residents and citizens from deportation.

Besides keeping families from being broken up by strict immigration laws, the program also would provide parents with work permits and other legal necessities to live in the United States.

Finally, Obama proposed to extend an executive action from 2012, which provided protections for immigrants who arrived in the United States as children but were never able to gain citizenship, reported CNN. This program, called Deferred Action for Childhood Arrivals, is known as DACA. The Supreme Court case, United States v. Texas, put all of these executive actions under scrutiny and on hold.

What Happens Now That There Is A Tie?

With the tie, none of Obama's measures can continue and nothing about the state of immigration changes for the time being. CNN reported that the case will get kicked back down to lower courts for states to decide on its legality or possibly for it to be re-heard by the Supreme Court in the future.

Will This Affect DACA?

Yes and no. According to The Dallas Morning News, the original executive action from 2012 is still in effect and will still be in effect until the next presidential administration. Obama had proposed an extension and expansion of DACA, but that will not move forward as a result of this Supreme Court ruling.

Can Similar Program Be Proposed Again?

Definitely. Another presidential administration could create its own programs with the same goals and make another executive action, though that too may be challenged by Texas or another state once again. According to Think Progress, that would bring the case back before the Supreme Court. If, by then, another judge is appointed, making them nine, the court would be able to make a more decisive ruling.

What Have The Presidential Candidates Said About Immigration?

According to ABC News, presumed Democratic nominee Hillary Clinton has spoken in support of these executive actions. She has been vocal about her desire for widespread immigration reform and the need for a pathway to citizenship for all immigrants. Republican nominee Donald Trump is against Obama's executive actions. His platform, for the most part, is anti-immigration, calling for more deportations and the construction of a large wall on the U.S. border with Mexico. Trump issued a brief statement on the Supreme Court ruling in which he reminded voters "what is at stake in November. The election, and the Supreme Court appointments that come with it will decide whether or not we have a border and, hence, a country."