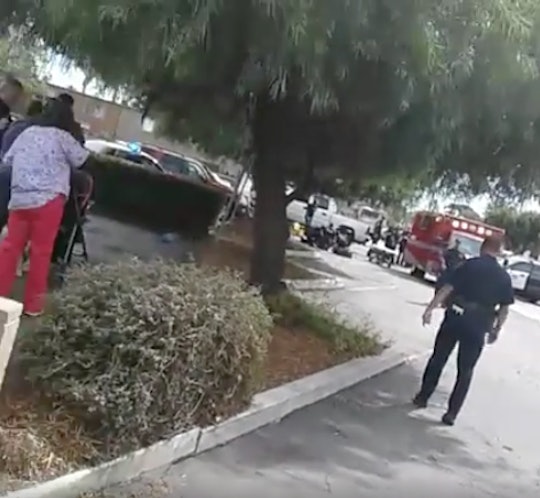 Everything You Need To Know About The Alfred Olango Case

Protesters gathered at a shopping center in El Cajon, California, Tuesday, demanding answers after a man his family has identified as 30-year-old Alfred Olango was shot and killed by police. Eyewitness reports — including a video of the shooting that has become part of the police investigation — have suggested that Olango was unarmed, and allegedly mentally ill. As an investigation into the shooting begins, here is everything you need to know about the Alfred Olango case.

According to Al Jareeza, police arrived on the scene after Olango's sister called for help, reportedly explaining that her brother was suffering from a mental illness and "was not acting like himself." In a statement, the El Cajon Police Department said that Olango was not armed, but was acting erratically, and "refused multiple instructions" by an officer "to remove his concealed hand from in his pocket." When Olango did not comply, one officer drew his firearm, while another pointed a Taser at the man. The report explained that Olango then "rapidly drew an object from his front pants pocket, placed both hands together and extended them rapidly toward the officer taking up what appeared to be a shooting stance." Both the officer aiming the gun and the officer with the Taser then reportedly discharged their respective weapons, and, according to the police report, Olango was shot "several times."

In a Facebook Live video filmed by a bystander, a woman identified as Olango's sister, Sarah, can be seen pacing and crying in the parking lot of the shopping center after her brother was shot. According to The Daily Mail, Sarah then told the officers on the scene, "I called you to help me but you killed my brother," and "Why couldn't you guys Tase him? Why why why why?"

Following the shooting, witnesses told NBC 7 San Diego that the officer in question "fired five rounds," and both police and a manager from a nearby restaurant have said Olango did not have his hands in the air when he was shot. Another witness told reporters that he didn't hear police warn Olango that they were about to shoot:

According to Mic, following the shooting, gathering protesters shouted "black lives matter," and "hands up, don't shoot," as officers in riot gear attempted to control the crowd. Protesters remained "angry, but peaceful," according to The Guardian, and El Cajon Police Chief Jeff Davis has asked for calm following Olango's death, promising a thorough and transparent investigation that will "be looked at by multiple sets of eyes."

Olango's death is not the only high-profile police shooting involving unarmed black men this month. The death of 40-year-old Tulsa, Oklahoma man Terence Crutcher was captured on video, showing him being shot by police while he had his hands up in the air, according to CNN, and recently released footage of 43-year-old Charlotte, North Carolina, man Keith Scott show his hands were at his sides when he was shot four times by police, according to The Atlantic. The Mapping Police Violence project has reported that Alfred Olango has become the 217th black man to be killed by police in 2016.