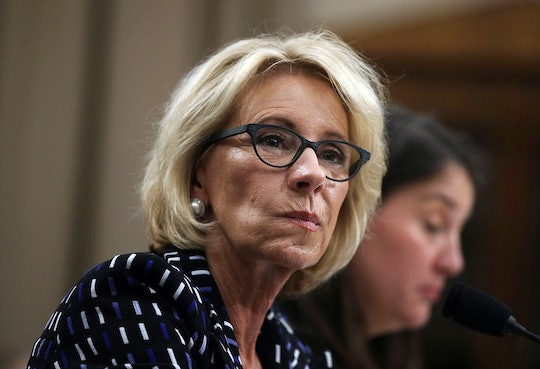 According to the Rape, Abuse & Incest National Network, women in college ages 18 to 24 are at risk for sexual violence three times more than the average woman. Campus sexual assault, rape, and violence is prevalent, pervasive, and woefully addressed within higher education, despite efforts from students, administrators, and other advocates. Betsy DeVos, the U.S. Secretary of Education, will meet with a number of groups on Thursday to discuss the issue of campus sexual assault — but with whom she's meeting is raising alarms within the higher education community. Here's everything you need to know about the Education Department's campus rape policy overhaul, because it's not looking good.

Besides being exceptionally unqualified to lead the U.S. Department of Education — DeVos has no teaching experience whatsoever — she had stated during her confirmation hearing in January that she would refuse to uphold Title IX guidance on campus rape. This guidance, set in place during the Obama administration, was a huge step in advocating for the victims of sexual assault and violence on college campuses. Vice President Joe Biden announced the move in 2011 at a speech at the University of New Hampshire at Durham, saying, "We are the first administration to make it clear that sexual assault is not just a crime, it can be a violation of a woman's civil rights."

With DeVos meeting with accused rapists and a mens' rights group on Thursday, the Trump administration is sending a completely different message to campus sexual assault victims — and they should be deeply concerned.

In April, DeVos hired Candice Jackson as the Education Department's Deputy Assistant Secretary in its Office for Civil Rights. DeVos' pick to lead the OCR has been a controversial hire, given that Jackson called the women who accused President Trump of sexual assault "fake victims" on her Facebook account. Jackson did not immediately respond to Romper's request for comment. Jackson's views appear to have changed little since that November Facebook post, when she offered a disturbing take on the motivations of sexual assault victims who go on to report their assaults to campus administrators. Speaking to The New York Times on Wednesday, Jackson said:

Rather, the accusations — 90 percent of them — fall into the category of ‘we were both drunk,’ ‘we broke up, and six months later I found myself under a Title IX investigation because she just decided that our last sleeping together was not quite right.’

On Thursday, Jackson apologized for her remarks to The Times, calling them "flippant." Still, that the person who is responsible for investigating campus rape cases could make such a remark should be a definite cause for concern. Jess Davidson, the managing director for End Rape on Campus, noted that despite the apology, Jackson's appointment and its implications for the direction the OCR is headed on campus rape are beyond concerning. "That statement put a pit in my stomach when I read it," Davidson told TIME.

While the overhaul of how campus rape is handled by the Education Department remains to be seen, the optics for DeVos' approach are all wrong. Yes, the accused should be entitled to due process — but automatically leading with the rights of the accused instead of rights the victim is troubling and misguided, and is the complete opposite of how the 2011 Title IX guidelines on campus rape approach the issue.

The message that DeVos' meeting sends to victims of campus rape is that the U.S. Department of Education doesn't believe you, because you might have made a false allegation. Even after the disastrously false Rolling Stone rape story, false rape reports are not nearly as prevalent or pervasive as the acts of actual campus rapes; according to the FBI, only 2 percent of all reported rapes are false — and that's nationally, not specific to college campuses.

While false accusations of campus rape do happen and are just as concerning and troubling, they shouldn't serve as the guiding philosophy behind addressing and combatting the issue of campus rape. And yet, DeVos and her department are turning the tables on how to solve campus rape by diminishing and invalidating the experience of actual rape victims — serving as yet another reminder of utter lack of credentials for the job of overseeing education in America and protecting students.