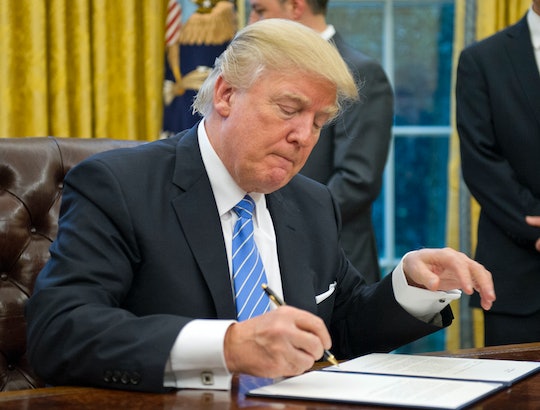 Ah, the first day on the job. There's nothing quite like it, am I right? President Donald Trump is already getting to work making America great again. As he vowed during his frighteningly bleak and contemptuous inauguration speech, Trump is ready to put "America first" — and one of the first items on his agenda as president is to withdraw the United States from the Trans-Pacific Partnership. Now that Trump has already changed the White House drapes, it's apparently time to wipe the slate clean on international trade — so why not take a moment to learn everything you need to know about the Trans-Pacific Partnership now that Trump wants nothing to do with it.

First, the basics: The TTP was to be former President Obama's signature international trade agreement in his final year of office — and it was. Signed by 12 nations — including the United States — in February of last year, it's a multinational trade agreement between countries to foster economic growth and trade relations. It was met with criticism both at home and abroad, but you'd think that since it has America's signature on it, the TPP would be a done deal — not so. The TPP needs to be ratified, and Trump has made it clear that he doesn't intend to do so.

Which Countries Have Signed The TPP?

The TPP was signed by 12 countries on Feb. 4, 2016, in Auckland, New Zealand. They include: Australia, Brunei, Canada, Chili, Japan, Malaysia, Mexico, New Zealand, Peru, Singapore, the United States, and Vietnam.

Why Is The TPP Important?

In addition to fostering economic growth and relations, the TPP sought to create a new international economic market that encompasses as many as 800 million people. The market created by the TPP has the potential to be more than twice the size of the European Union. But the TPP is about so much more than just creating a new economic bloc, as Vox explains:

The agreement could require countries to adopt stricter labor and environmental rules, provide stronger legal protections to drug companies, lengthen the term of copyright protection, give foreign investors a new way to challenge countries' laws and regulations, and much more.

What Don't Some People Want The TPP?

The TPP has faced criticism that it's an international agreement that was made without transparency. Many of the TPP negotiations were closed sessions or conducted in secret and others have noted that special interest groups were given far more seats at the negotiating table than the general public — and that's a criticism from across the board of all 12 nations, not just from the United States.

Now That The U.S. Is Out, What Happens To The TPP?

Seeing as how the United States initiated the TPP, it's a bit awkward to now pull out of the TPP, meaning that the deal itself is likely to fall apart without U.S. support. But what does that mean for international trade? Well, China has been pretty vocal about stepping in to fill the void the TPP leaves behind — and that's not good for the United States. Our country literally had signed the deal to be nation to lead a new era of global economic growth, but Trump's America First play has put China at the head of the international trade race instead.