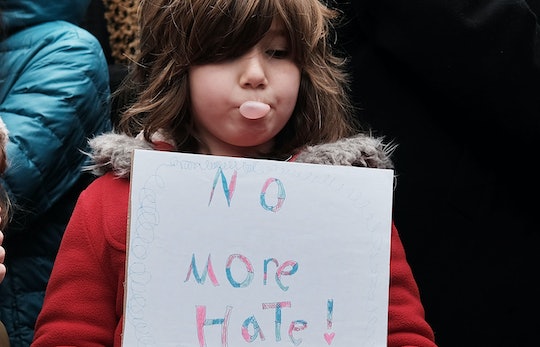 Everything You're Teaching Your Kid About Racism Is Wrong

On Saturday, thousands of alt-right extremists descended on Charlottesville, Virginia, to protest the removal of the city’s statue of Confederate Gen. Robert E. Lee. What ensued was a display of white supremacist ideology and racial violence so shameless that many people have felt compelled to talk to their children about it. And when we parents have that conversation with our kids about Charlottesville, framing it as hate versus love is the most obvious route to take. It isn’t, however, the most effective one.

As a Black mother with two Black sons, I cannot let them think that racism looks like white men with torches. It happened on Saturday, but it is not the norm. I have to prepare them for what is the norm: the microaggressions and the everyday acts of racism they will be faced with interpersonally and institutionally. The conversation that all of us as parents need to have with our children about racism starts there.

When we broach the topic of race with our kids, we tend to assume they are much less insightful than they are. Children know what it means to be afraid, and white supremacy is an expression of fear. The things we do every day that treat people of color like "others," like they don't belong, put them in a box in our mind. When they're in that box, all we see is everything different about them, but not in a good way. And when we don't take the time to understand, we become afraid of what's different.

These are things that children can understand, but we don't give them enough credit. Instead, parents tend to say as little as possible about what's actually going on in this country in the hopes of protecting their little ones. What it ends up doing is growing them into adults who are ill equipped to respond and react when love does not in fact win. If we are to have meaningful conversations with our children about race, we have to give them the understanding of the fundamentals in the realest terms possible.

Talking About the S-Word

Children hate vegetables, chores, homework. People? No—not yet. Explaining to them that racism is about hate is a superficial conversation and one that’s not entirely true. Racism, in its simplest definition, is a belief that one race is superior. In America, racism is mostly about preserving whiteness. It is about fear—something that children understand very well. To get to why that fear is there, we first have to talk about slavery.

The rally in Charlottesville was actually about slavery, among other things. The statue being removed pays homage to the man who was the commander of the Confederate army and believed strongly in the institution of slavery. For people of color, particularly Black people, confederate statues and symbols are traumatizing and terrifying reminders of this country’s legacy of white supremacy and hate toward us. Children can understand this fear if we make it relatable for them. “Imagine being taken from your home by strangers, separated from your family, forced to work hard, and treated very badly by those strangers. This is what happened to Black people many, many years ago. And even though slavery is over now, Black people are still often treated unfairly because they are Black.”

Of course, this dialogue doesn’t fully capture the traumatic conditions or implications of slavery, but it opens up a conversation and allows children to ask questions according to their age-appropriate understanding. Waiting until your children are learning about slavery in school is too late. Take the awkwardness that children feel when talking about serious subjects in front of their classmates and add it to the tension and discomfort white kids may sense on the part of their Black peers, who almost always know the country’s history of slavery already, and as well as confusion and even guilt they may feel learning about the subject for the first time, and it's not an ideal learning environment. As soon as children are old enough to understand unfairness, they are old enough to talk about the S-word.

The Truth About Colorblindness

Well-meaning parents usually coincide conversations of hate versus love with talk about how we’re all the same. And while biologically, that’s mostly true, it is the number one way not to handle talking about racism. Innocent as we think they are, babies as young as 6-months old start to recognize racial differences and prefer people of their own race. They notice race. Pretending that racial differences don’t exist only leaves them vulnerable to develop their own notions about people of color. Allowing the media, with its negative representations of racial and ethnic minorities, to shape our children’s views of these groups is irresponsible, not protective.

When children notice that the kid on the playground has dark skin, it is a teachable moment, not a shush-able moment.

Quite simply, colorblindness is a glaring display of white privilege. Parents of color have no choice but to talk about race early and often. We are not allowed to forget or pretend that our race does not matter because every day we navigate a society that has placed well-developed obstacles in our way. When you say, “I don’t see color,” you are saying, too, that color (anything other than white) is something negative, shameful even.

That message also denies of POC their racial and ethnic identities and negates the reality of the social inequalities we face each and every day. When children notice that the kid on the playground has dark skin or that the family in the grocery store speaks differently than them, it is a teachable moment, not a shush-able moment. Acknowledge the differences and then reinforce the similarities.

Take stock of the books your children have access to, the schools they go to, the neighborhood you live in, and the television and movies they watch. What are they being exposed to? Do they have regular opportunities to engage with same-age peers of different racial and ethnic backgrounds? The passive reaction to this says it doesn’t matter, but the decisions we make as parents communicate messages to our children.

Almost everything we do to shield our children from race is wrong.

Your preference for predominantly white schools, avoidance of Black neighborhoods, penchant for film and television shows that garner laughs at the expense of stereotypical tropes: All of these things, no matter how unintentional, communicate messages about race. Proactively seeking out movies, books, and other media featuring positive images of people of color is extra work, but compared to the work parents of color have to do to prepare our children for the world, it’s a small effort that’s well worth it.

Almost everything we do to shield our children from race is wrong. Race is not a topic white people should avoid, and it’s not something that people of color can avoid. My son was called a n***er before he learned how to ride a bike. He, like all children of color, cannot hide behind age to avoid racism. If another white supremacist rally never occurs, Black children will still face school expulsion at higher rates than their white peers. Black girls will still be viewed as less innocent by adults. Before the next grand display of racism occurs, children of color will have endured thousands of microaggressions. Children of color are constantly reminded of their marginalized status.

Colorblindness not only creates a hostile environment, it allows those everyday acts of racism to be brushed off as harmless. It allows us to ignore our racial biases. Gone unchecked, it produces the kind of people whose actions, or lack thereof, hurt people of color. It's hard to take a stance against something that you don't believe exists.

Making this conversation about hateful villains denies the fact that your innocent children could one day participate in the oppression of others. The only thing standing between them and that very real possibility is you.