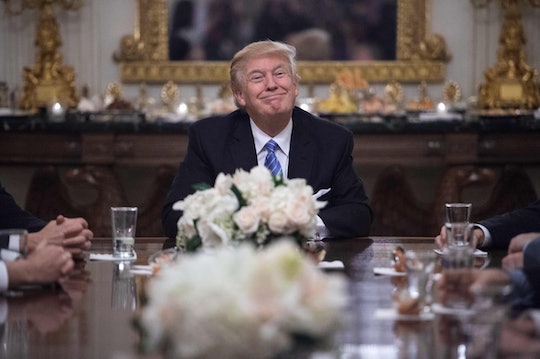 Another day, another White House press briefing that yields more questions than actual answers. After a number of reporters pressed press secretary Sean Spicer Tuesday about why Trump hasn't called for an investigation into his previous claim that millions of people cast illegal votes in the election, Trump announced Wednesday morning that there would be a "major investigation," looking into the so-called "voter fraud" problem he's claimed has plagued the election, according to The Washington Post. The only problem? Evidence of illegal voting in the election doesn't actually seem to exist, and Trump's claims have already been debunked by numerous outlets.

Trump's allegations of voter fraud began even before the Nov. 8 election, when he suggested that, if he lost, illegal votes would be the reason why. Then, after he won the majority of Electoral College votes in a surprising victory, he continued to perpetuate the claim that millions of votes were cast by those ineligible to vote, like undocumented immigrants, people who registered to vote in more than one state, and registered voters who are actually deceased — even claiming that those votes explained why he lost the popular vote by the widest margin in history, according to The New York Times. Now that Trump has been pushed to actually stand behind his allegations, he is coming out swinging, and promised on Twitter Wednesday that he would "strengthen up voting procedures," based on the results of the investigation (Romper's request for comment was not immediately returned).

When initially asked about Trump's voter fraud claims Tuesday in his second press briefing, Spicer essentially told reporters that, well, voter fraud is something Trump believes to be true. According to CNN, Spicer said,

The President does believe that. He's stated that before, I think he has stated his concerns of voter fraud and people voting illegally during the campaign and continues to maintain that belief based on studies and evidence people have presented to him.

After he was asked similar follow-up questions by other reporters, Spicer conceded that the White House would "maybe" investigate, before ultimately shutting down further discussion, but now, that investigation definitely seems to be happening. And it's happening even though no one from the Trump camp has yet been able to provide any proof that voter fraud actually occurred in the first place — while many experts have already said that it didn't.

According to NBC News, a Pew research study from 2012 did find that millions of voter registration records were invalid due to people moving or dying, but the report's author, Center for Election Innovation & Research executive director David Becker, explained months ago that that isn't the same as what Trump is suggesting, since there's no actual evidence that votes were cast in their names. And as Becker wrote in a tweet Tuesday, "voting integrity [was] better in this election than ever before. Zero evidence of fraud."

Ohio Secretary of State Jon Husted, who is a Republican, also called out Trump's claim on Twitter Wednesday, according to CNN, and explained that his office also found voting integrity to be solid, based on their own review of voting results. Husted added that they "already have a statewide review of 2016 election underway," and that the voting system is "hard to cheat."

Although Spicer claimed in the briefing that there was a study "that showed 14 percent of people who voted were non-citizens," according to ABC News, the reality is that even one of the report's authors said he misunderstood the results. What the report actually found was that 14 percent of non-citizens thought they were registered to vote, not that they actually voted. What's more is that the study — authored by Old Dominion University professors Jesse Richman and David Earnest — was actually published in 2014, and with a sample size of only a few hundred people who provided answers via an online survey, it's far from being a comprehensive report on possible voter fraud in the 2016 election.

As for Trump's claims, Richman explained to ABC News that the findings of his study were “taken out of context,” and weren't meant “to make an unsupported claim concerning massive vote fraud.” He said,

I don’t know if [he] has read our statements to try to set the record straight. If he has, he’s deliberately trying to mischaracterize what our study shows. Did the non-citizen vote lead to Trump’s popular vote loss? No. Our data doesn’t support that.

Richman is far from being the only one unimpressed with Trump's take, though. In a statement, California Secretary of State Alex Padilla told NBC News that Trump "is dangerously attacking the legitimacy of free and fair elections and the foundation of our democracy" with his claims of voter fraud, and called out Spicer and the President for continuing to perpetuate the claims:

These are not 'alternative facts.' They are corrosive lies without any evidence. Even leaders in the President's own party agree there is no evidence to support his claims since they were irresponsibly made back in November. Rather than continue to deliberately deceive the American people about his nearly 3 million vote loss, the President should focus on addressing the substantiated threats reported by our intelligence community.

Even if it is possible for Trump to prove that voter fraud did occur, it still isn't likely that he'll be able to prove that it occurred the way he claims. Although Rutgers professor Lorraine Minite, whose research focuses on voter fraud, told ABC News that "there have been a handful of cases where people who are not citizens have made it onto the voter rolls for various reasons," she noted that "the scale [Trump is] talking about is just simply absurd," and that "the idea that 3 to 5 million illegal voters successfully cast ballots that were counted in this election is just beyond belief."

There's certainly no doubt though that if Trump can in fact prove his claims, it'll be a big deal. As The Washington Post noted, Trump has suggested that "the number of illegal votes may have been larger than the populations of 38 states," and that "as many as 30 to 40 percent of the estimated 11 million undocumented immigrants in the United States cast ballots." That's definitely not just "a handful of cases," and would be a sign that massive reform would be needed.

Whether or not Trump really does believe that voter fraud occurred, now that he's leading the country, it looks as though he'll have to follow through on proving it. And regardless of party affiliation, there's no question that the results will be something pretty much every voter is going to want to see.