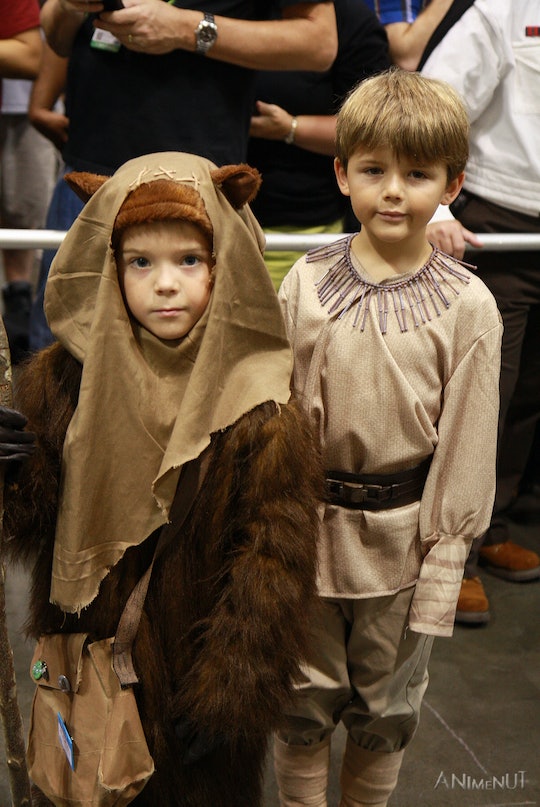 Ewoks Vs. Toddlers: A Very Scientific Breakdown Of Who's Cuter

Star Wars: The Force Awakens is coming out in a mere ten days, and I can't stop thinking about it. Can anyone? In in preparation for the Star Wars event of the decade, many have been re-watching the previous films, which brings me to Ewoks. Perhaps you remember the toddler-like teddy bears who inhabit the Moon of Endor and made their first appearance in Return of the Jedi? Well, they're pretty cute (OK, they're famously the cutest things in the entire world), but are they ~toddler cute~? In the battle of toddlers versus Ewoks, who's cuter?

We used a very scientific* process to come up with the following results.

*Not even remotely scientific but I'm not here for your negativity. Just roll with it.

This may seem an obvious point, but when discussing who is cuter, it seems relevant to discuss who will remain cuter for longer. Toddlers are very cute as toddlers, but do not forget that they grow up to be pimpled, un-cute adults. Ewoks, on the other hand, are cute even when fully grown. I may even go as far to say that they are cute their whole lives, and when they are young, they're even cuter. Even if toddlers are cute, it's a fleeting cuteness, whereas Ewoks are cute forever.

OK, this is a tough point because some may argue that Ewoks' prowess on the battlefield is cute, while others might find that off-putting. Though Ewoks and toddlers are both fairly uncoordinated, I doubt toddlers could bring down the Empire. Part of toddlers' cuteness is that they are bumbling along through life, whereas Ewoks are independent, hand-to-hand combat-puppets, and that's a little scary.

I get that there's a fair argument to be made on both sides of this but I'm calling it: Point 1 for Toddlers!

Fact: Ewoks Are Covered In Fur

Fur is an important component to cuteness in my book. Puppies, kitties, chicks, even little baby pigs are furry, and it only magnifies their already cute little selves and perfectly haloes their gigantic, cute eyes. Toddlers have hair, some may even be a little furry, but they are a far cry from Ewok levels of fur, so using the relationship of fur to cute factor, I'm going to have to say toddlers lose this round.

Fact: They Both Speak Their Own Language

Toddlers have a dialect all their own, as do Ewoks, who speak in little whistles and grunts that is a fully-formed Star Wars-universe-certified language that superfans can learn (if that's how you want to spend your days). Who knows, Endor seems like a nice vacation spot, and you'd want to be able to get around, order a beer, give directions. Sure, you can learn toddlerspeak, too, but toddlers are also learning a language every day. Watching them try to form words and sentences is pretty cute, while Ewoks' lingo is way more fierce than cute. So...

I'm going to call this one a tie for now, mostly to save our species some embarrassment (we all know the true winners). Though there have been rumors that Ewoks won't make an appearance in The Force Awakens, I'm not giving up hope (a new hope?). This may seem obvious, but if you want to go for the cuteness gold, dress up your toddler as an Ewok, and boom: best of both worlds.