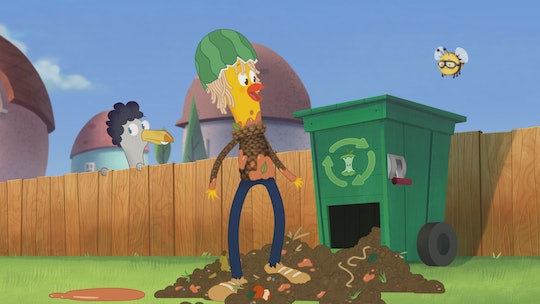 The cheerful, curious chicken named Archibald Strutter, his three siblings, and lovable sidekick Bea are back with exciting new adventures in Season 2 of the DreamWorks Animation series Archibald's Next Big Thing on Netflix. And in anticipation of the show's upcoming premiere on March 20, Romper has an exclusive clip from the new season of Archibald's Next Big Thing that will teach kids an environmentally-friendly lesson about composting as they sing along.

Tony Hale brings the lovable Archibald to life alongside the rest of the star-studded cast, which includes Adam Pally of The Mindy Project, Chelsea Kane (Baby Daddy, Fish Hooks), Gone Girl's Rosamund Pike, Jane Lynch, and more. Together, in an upcoming episode called "The Compost Elf," the gang learns about composting with a fun song.

"There are things you can compost and thing you cannot," the Compost Wizard sings. "Say yes to lawn trimmings and food scraps that rot. But say no to plastic, tin cans, and junk or your efforts at composting will soon be sunk."

In the episode, Eric Fogel, executive producer of Archibald’s Next Big Thing, tells Romper that "Archibald teaches the citizens of Crackridge the improper way to compost and pretty soon the whole town is covered in trash!"

"To set things right, Archibald and his siblings perform a big musical number on the back of a truck and create a brand new holiday in the process," he says.

Fogel tells Romper there's lots for kids to love about Archibald and his new season of adventures. "Archibald is a chicken who sees the best in everything and everyone," Fogel says. "Kids will love his silly humor and his wide-eyed sense of wonder. Season 2 of Archibald’s Next Big Thing promises to be packed full of fun and adventure that’s great for kids and pretty much everyone else, too!"

So don't miss your chance to sing, dance, and compost your way to a good time with Season 2 of Archibald’s Next Big Thing, on Netflix March 20. And remember, it's not gross, it's compost.