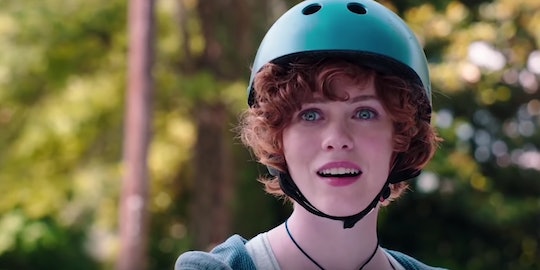 No one is better at solving mysteries than Nancy Drew, the teenage detective with a knack for getting to the bottom of things. Generations of readers have grown up with her in the Nancy Drew book series by Carolyn Keene, and now she's back on the big screen with a whole new adventure.

In the new film, Nancy Drew and the Hidden Staircase, the titular character is the new girl in the boring town of River Heights. But things get a little more exciting when she's asked to help solve some mysterious activity in the spooky Twin Elms mansion, owned by a woman named Flora.

And the mansion is spooky. In this exclusive clip, taken from the movie — which is available for digital download now, and available on DVD and Blu-Ray on April 2 — gives viewers a look inside the super creepy (and ghost-ridden) mansion.

Not only does the house look old, but the mansion is decorated in knickknacks that would make anyone feel a little creeped out. In the clip, you can see the house is decorated with plastic pink flamingos, nut crackers, and some very interesting stuffed animals.

Viewers can get a better look inside of Flora's house (also known as the Twin Elms mansion) when they watch Nancy Drew and the Hidden Staircase and see her spend so much time solving the mystery there.

Needless to say, this is one adventure new and old fans of Nancy Drew won't want to miss.

Although people are familiar with Nancy Drew (the book, Nancy Drew and the Hidden Staircase was published in 1930, according to Vulture), this new film provides a new take on the character fans know and love, according to Variety. In this film, Nancy Drew is an "assertive, red headed millennial" who has some amazing traits; she's "intelligent, independent," and confident — all of which make a very good role model.

Although Nancy has always been a good role model (she's a teenage mystery solver, after all), Lillis added a fresh take on the character, making her a confident tomboy with a laidback attitude (Nancy is a skateboarder in this film). It's this new take that makes this movie stand out for its positive gender representations and character strengths, according to Common Sense Media.

Although Twin Elms might seem a little old-fashioned, this new iteration of Nancy Drew seems to be anything but that.