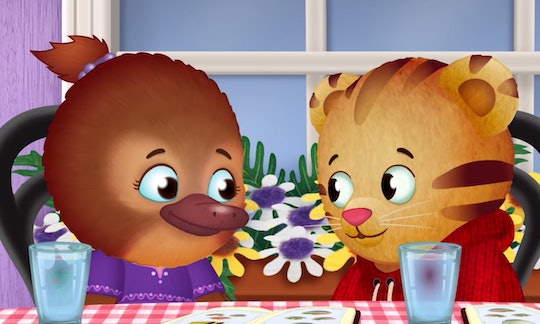 There's a reason Daniel Tiger's Neighborhood is beloved by kids and their parents — he's just so darn relatable. The little tiger doesn't always do what he's supposed to on the first try, but with gentle guidance and reassurance from the adults in his life, Daniel is constantly striving to do what's right. For example, a clip for an upcoming new episode of Daniel Tiger's Neighborhood exclusively shared with Romper teaches kids how to behave calmly at restaurants and I have a feeling plenty of parents will be showing it to their own rambunctious little ones.

PBS Kids will soon air three new episodes of the favorite children's series. That's right — not one, not two, but three new episodes are coming to Daniel Tiger's Neighborhood next week. The big dates to mark on your calendar are Monday, Jan. 6, Tuesday, Jan. 7, and Wednesday, Jan. 8. Be sure to check your local listings for the exact airing times.

Romper got an exclusive peek at one of the new episodes ahead of its airing. In the episode titled "Calm at the Restaurant," which airs on Tuesday, Jan. 7, the Tiger family goes to the restaurant for taco night with Jodi and Dr. Plat. There, Daniel and Jodi learn there are times to be silly and times to be calm.

The clip begins with the two young pals looking seriously pumped to be out to eat together with their families. Before long, an improvised taco cheer of sorts begins — leading to Daniel's flailing arm bumping into a server carrying a tray. "Daniel, we're in a restaurant. It's time to be calm," his dad reminds the young tiger cub.

"Sorry, Prince Tuesday," Daniel and both Jodi say to the waiter, after nearly knocking the tray out of his hands.

"I can show Jodi how to calm down!" Daniel tells his dad, before both he and Jodi begin to sing, "Give a squeeze, nice and slow. Take a deep breath and let it go."

Pretty genius, right? I'm going to have to make it a point to show my young kiddos this episode. "Calm in Class" is the second part of the episode, which sounds equally as helpful.

In case you're interested in the two other new episodes, Monday's airing of Daniel Tiger's Neighborhood is titled, "Daniel Tiger Twirl/You Can Play Your Own Way," and Wednesday's is called, "Mad at the Crayon Factory/Mad at School." So be sure to mark your calendars!