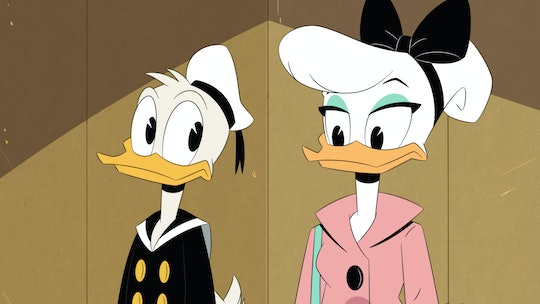 Courtesy of The Disney Channel

Disney's DuckTales has managed to land some pretty impressive guest stars this season. In fact, the latest to make a cameo on the animated 2017 reboot is likely a name both you and your kids will instantly recognize. In an exclusive DuckTales clip shared with Romper, you'll see Donald Duck and Daisy Duck meeting for the first time ever.

The upcoming DuckTales episode entitled "Louie's Eleven" will be Daisy's first appearance on the show. The episode, which airs on April 25, sees Donald's nephew Louie hatch a plan to crash a high-class party being hosted by the town of Duckburg's most influential tastemakers, Emma Glamour. With Louie's help, Donald hopes to infiltrate the party with his band, the Three Caballeros, for a surprise performance he's sure will make him famous. But snagging a stage pass and sneaking into Glamour's party proves to be no easy job when Donald comes face to face with her no-nonsense party planner, Daisy, in an elevator.

"Wonderful night, isn't it?" Donald says to Daisy. "Kind of a terrible night, actually," she responds and then mischief ensues.

According to Entertainment Weekly, the second and third seasons of the 2017 DuckTales reboot has brought a long list of appearances from guest characters who, in the '90s, all starred in their own animated Disney shows. From Chip and Dale of Chip 'n Dale: Rescue Rangers to Kit and Molly of TailSpin, viewers will spot a lot of familiar faces in DuckTales' latest season.

DuckTales "Louie's Eleven" episode is scheduled to premiere April 25 at 9:30 a.m. on DisneyXD and DisneyNOW.