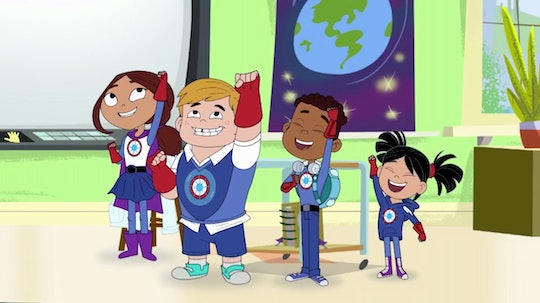 Look up at the sky! It's a bird, it's a plane, it's — an elementary school superhero student? While we've all heard stories about how superheroes save the world, PBS Kids' upcoming series Hero Elementary takes young viewers inside a school where a diverse group of superhero kids learn to master their special powers. Get to know this new crew with Romper's exclusive look at Hero Elementary coming to PBS Kids before the exciting — and educational — series premieres next month.

"I am proud that Hero Elementary is as much fun as it is educational," series co-creator Carol-Lynn Parente tells Romper. "We found a way to organically embed the science in the lore of our superhero universe."

The result is a uniquely fun show for children between the ages of 4 to 7 that goes beyond merely educating to actually spark an interest in STEM disciplines through exciting superhero storylines. Each episode addresses various science curriculum, such as the ability to predict, observe and develop and test ideas or hypotheses. But along with igniting kids' interest and curiosity in science, each episode of Hero Elementary also shows viewers how to solve problems like scientists and tackles social-emotional concepts like empathy, kindness, and teamwork.

"I think parents, who love superheroes as much as their kids do, will be excited that Hero Elementary is encouraging and empowering their kids to go out in the world and actively be heroes by doing science," Parente tells Romper.

Of course, the show aims to do more than introduce kids to science and other STEM fields — it's hoping to take representation in children's television up a notch with a diverse cast of characters that includes bilingual speakers and a superhero on the Autism spectrum. "Having a diverse team of hero students allows kids to see themselves in these characters, inspiring them to use their own Superpowers of Science," Parente says.

Children will fall in love with Hero Elementary's Sparks Crew. There's Lucita Sky, a bilingual natural leader whose ability to fly is hampered only by her fear of heights and AJ Gadgets, a clever superhero on the Autism spectrum who can engineer super gadgets and has the power of thought projection. Described as "tiny, but mighty," Sara Snap is not only super strong, she can teleport too. Rounding out the crew is Benny Bubbles, a loyal friend whose ability to cast protective bubble forcefields keeps the rest of the crew safe.

Hero Elementary premieres June 1 on PBS stations nationwide, as well as the PBS Kids 24/7 channel and PBS Kids digital platforms. The series is expected to be comprised of 40 half-hour-long episodes, meaning there's plenty of superhero science awaiting your kids.