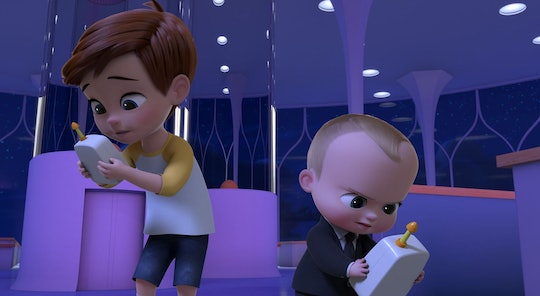 Suit up, everyone: The Boss Baby is making comeback with a whole new set of challenges. In an exclusive look at what's to come in The Boss Baby: Get That Baby!, a new interactive special coming to Netflix on Sept. 1, Boss Baby takes on a mysterious arch nemesis from his past.

Rather than a passive viewing experience, the new Boss Baby special is described as a "chewpie-triggered simulation exercise," wherein your kids can participate in a series of missions that will test their decision making abilities as they move through the ranks of Boss Baby's professional network, all the way from "Mail Room Baby" to, you guessed it, Boss.

In the exclusive preview shared with Romper ahead of the special's premiere next month, Boss Baby (voiced by JP Karliak) and his big brother Tim (voiced by Pierce Gagnon) head to Baby Corp headquarters to deal with an "arch nemesis" who's "back for vengeance." From there, Boss Baby has to make all sorts of choices to hopefully "defeat villains like Bootsy Calico, Happy Sedengry and Fredrick Estes" that your little ones can help make.

The Boss Baby: Back In Business series, currently in its third season originally premiered on Netflix in April 2018. The upcoming interactive Boss Baby special is actually one of many at Netflix. Titles such as Puss in Book: Trapped in an Epic Tale, Buddy Thunderstruck: The Maybe Pile, Stretch Armstrong: The Breakout, Minecraft: Story Mode, Captain Underpants Epic Choice-o-Rama, and Carmen Sandiego: To Steal or Not to Steal all offer younger viewers the chance to make decisions that alter the course of the narrative.

Netflix suggests you join in the story on a newer device, including smart TVs, streaming media players, game consoles, computer browsers, Android phones and tablets, iPhones, iPads, and iPod touches. Additionally, ensure that your device is running the latest version of the Netflix app to play these titles interactively.

So while you wait for The Boss Baby: Get That Baby! to premiere on Netflix on Sept. 1, you can introduce your kids to the OG 2017 film, The Boss Baby, which is available to stream on Amazon Prime as well as YouTube.