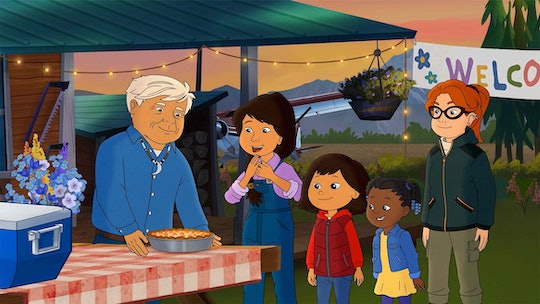 Young explorers can adventure to Alaska without having to leave their living rooms thanks to a slew of new episodes from PBS Kids' Molly of Denali. In an exclusive clip from an upcoming Molly of Denali episode, slated to premiere on PBS Kids in late May, you'll find inspiration for your family's own outdoor adventures.

"This week of episodes is a great chance for kids and families across the country to discover and learn about new and amazing places from home," Linda Simensky, the head of PBS Kids content, tells Romper. "Exploring and learning with Molly of Denali can be fun no matter where you're watching from."

According to Simensky, the show's upcoming new episodes will see Molly and her friends embark on a number of different adventures, including the search for a missing turkey and the building of their very own sailboat. "We're excited for viewers to travel along with them," Simensky tells Romper.

In the exclusive clip shared with Romper, Molly and her friend Trini team up with Canadian environmental journalist Nina to search for cloudberries. After double checking that they've properly identified the cloudberry bushes, the trio sets out to pick enough berries for Molly's grandfather to make a special pie.

While the show is, of course, fun, it's also educational. Woven into each episode's adventure are lessons on things like teamwork, honoring your elders, and reasoning and observational skills. The show aims to emphasize informational text-based learning and Alaskan Native values.

In fact, when Molly of Denali first premiered in the summer of 2019, it was the first nationally distributed children's show to feature an Alaska Native as the lead character. The animated action-adventure comedy has since introduced viewers to 10-year-old Molly Mabray, a resourceful Alaska Native girl who lives in the fictional village of Qyah, Alaska.

While Molly often helps her parents run the Denali Trading Post, which functions as a general store, bunkhouse, and transport hub, the animated series also finds her and her friends Tooey and Trini busy with different adventures. From fishing, building snow forts, and traversing a volcano in a dog sled, Molly introduces children to not only Alaska, but a wealth of outdoor fun.