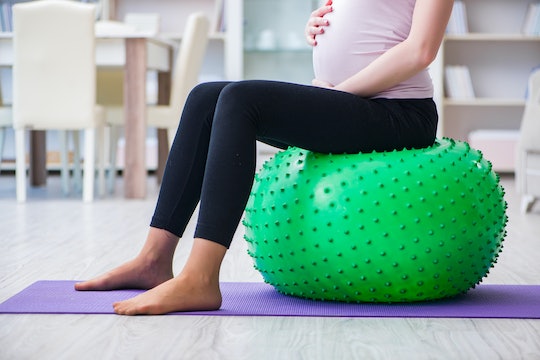 Here's When You Should Actually Exercise To Make Your Pregnancy Healthier, New Study Says

The study, which was published in the journal Medicine and Science in Sports and Exercise, looked at data from 1,333 women over a 25-year period (1985 to 2011) who enrolled in a National Heart, Lung, and Blood Institute study called Coronary Artery Risk Development in Young Adults (CARDIA), according to News 18. Per the University of Iowa, "the women completed seven total study visits after first being enrolled, reporting whether they had become pregnant or gave birth and whether they developed gestational diabetes." The women were also given a fitness exam during the first study visit to test whether they could walk for two-minute intervals on a treadmill at increasing speeds and on steepening inclines.

Scientists don't know what causes gestational diabetes, but they have some clues, according to the American Diabetes Association. "Hormones from the placenta help the baby develop, but they can also make it difficult for the mother's body to use insulin, creating insulin resistance, which is what may cause gestational diabetes. Without enough insulin, glucose cannot leave the blood and be changed to energy, so it builds up excessively in the blood."

According to a 2014 analysis by the Centers for Disease Control and Prevention, the prevalence of gestational diabetes is as high as 9.2 percent.

Despite the fact that it's not uncommon, it does have pretty serious implications. If untreated or poorly controlled, gestational diabetes can hurt a woman's baby, according to the American Diabetes Association. That's because the pancreas works overtime to produce insulin, but the insulin does not lower the blood glucose levels — and, although insulin does not cross the placenta, glucose and other nutrients do. Therefore, that extra blood glucose goes through the placenta, which gives the baby high blood glucose levels and can cause the baby's pancreas to make extra insulin to get rid of the blood glucose. The extra energy is then stored as fat, which can lead to macrosomia, when a newborn is significantly larger than average (with a birth weight of more than eight pounds, 13 ounces).

"Women are very careful during pregnancy with what they eat and the exercise they get," co-author Kara Whitaker, Assistant Professor from University of Iowa said, according to News 18. "But the study shows women should engage in these healthy behaviors before they get pregnant, as well."

"If female patients who are considering pregnancy weren't meeting physical activity guidelines (as outlined by the American College of Sports Medicine), then a doctor could write a prescription, such as for a walking program," Whitaker said, according to Science Daily.

Regardless of what form it takes, if you're thinking about getting pregnant, it's never a bad idea to get a little exercise.