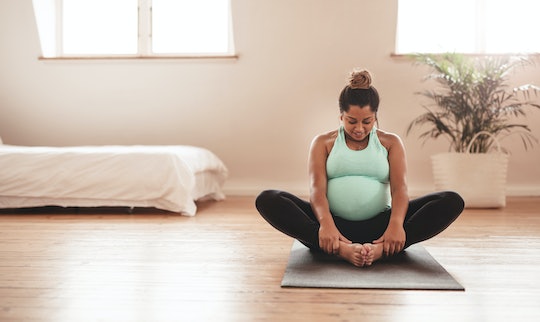 It's no secret that exercising during pregnancy can be beneficial to expecting moms. As long as your doctor gives you the green light beforehand, it's actually recommended that you get your sweat on during pregnancy. Research has also shown clear benefits for your baby as a result of regular exercise while you're pregnant. But apparently, exercising while pregnant could potentially prevent childhood obesity, according to a new study.

The study — which was carried out at Washington State University —was presented at the American Physiological Society’s annual meeting held this week, as per Scary Mommy. It compared offspring of mice that exercised moderately for 60 minutes per day while pregnant with another group of mice that didn't exercise, according to Science Daily. The offspring of both groups were then fed a high-fat diet after they were weaned. And there were some pretty clear differences between the groups. It turns out offspring of mice that exercised were able to burn fat more efficiently — and didn't have as many symptoms of diabetes or fatty liver disease.

"Based on our findings, we recommend that women — whether or not they are obese or have diabetes — exercise regularly during pregnancy because it benefits their children’s metabolic health," lead study author Jun Seok Son said, per Science Daily.

Our data suggest that the lack of exercise in healthy women during pregnancy can predispose their children to obesity and associated metabolic diseases partially through impairing thermogenic function.

It's worth noting this is a study on mice — and not actual people. So there's still more research needed to confirm if exercise during pregnancy similarly affects human children. Son plans to continue his research to hopefully explain why and how pregnancy exercise seems to protect offspring from diabetes.

This isn't the first time research has shown benefits to babies whose mothers exercised during pregnancy. A 2011 study involving 61 pregnant women assessed both the mothers' and the fetus' heart function during and after pregnancy. It found that pregnant women who exercised for at least 30 minutes per day, three days a week, had fetuses who had lower heart rates compared to those who didn't exercise, according to Live Science. What's more is the differences between the exercising and non-exercising groups were still apparent one month after the baby was born.

According to the American College of Obstetricians and Gynecologists (ACOG,) exercise during pregnancy can help ease back pain and constipation, and it can help you lose the baby weight after delivery. Staying active during pregnancy can also help expecting moms avoid complications during labor and delivery. Specifically, exercising while pregnant can be beneficial for women who have a history of preeclampsia, gaining an excessive amount of weight during pregnancy, or gestational diabetes.

As you can see, it makes sense that the Centers for Disease Control and Prevention (CDC) recommends that pregnant women get at least 150 minutes of moderate-intensity aerobic activity every week, according to the ACOG website.

When I'm not pregnant, I train for marathons and I'm generally very active. I cut back on the intensity of my workouts — along with the distances I'm running — when I'm incubating a tiny human. Still, I try to keep working up a sweat for as long as possible. (Mostly for the sake of my own mental health.) However, the potential benefit of having helped my kiddos avoid obesity and all the conditions that can come along with it is definitely a plus.