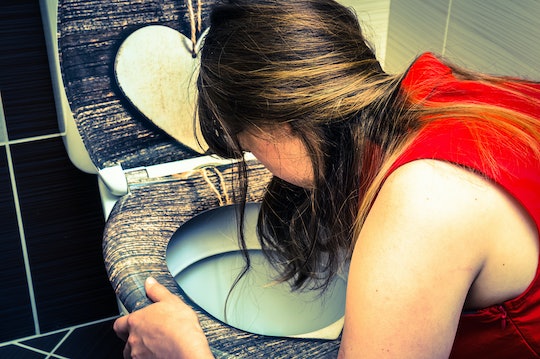 Here's What Should *Not* Happen During "Normal" Morning Sickness

The first trimester comes with a few "surprises" that are less than pleasant, like morning sickness. While it can vary in frequency and intensity, morning sickness is usually an early indicator of pregnancy. As a first-time pregnancy person, the constant nausea and vomiting (honestly, who decided it was "morning" sickness?) can be incredibly unsettling. Thankfully, experts know what should not happen during normal morning sickness, so soon-to-be moms can either rest a little easier or seek medical attention as soon as possible.

According to the American Pregnancy Association (APA), more than 50 percent of women are "blessed" with first trimester morning sickness. Constance Young, M.D., assistant professor of obstetrics and gynecology at Columbia University Medical Center, tells Self morning sickness might be the result of elevated progesterone levels, which contribute to fetal development. Though Jason S. James, M.D., medical director of FemCare ObGyn in Miami, Florida adds that if you don't experience morning sickness you should "consider yourself lucky." It doesn't mean your baby isn't developing, or that something's necessarily wrong, either. A typical, complication-free pregnancy, with typical morning sickness, also won't determine the gender of your baby, or predict how sick you'll be in subsequent pregnancies. In other words, every person and every pregnancy is different.

You can alleviate the symptoms with crackers, small amounts of fluids and small meals throughout the day, rest, and even salty potato chips. Some nauseous pregnant women turn to acupressure or pregnancy massage to assuage their discomfort, too. Others opt for doctor-approved medication or regular old Saltine crackers. It depends on how severe your particular situation, of course, and whether or not morning (read: all day) sickness is affecting your quality of life and/or health. If left untreated, the frequency, severity, and duration of your nausea and vomiting worsen. However, during typical morning sickness, you should not have "excessive nausea and vomiting that prevents you from keeping any food down," the APA adds.

According to KidsHealth.Org, severe morning sickness is diagnosed as hyperemesis gravidarum, or "excessive vomiting during pregnancy, often beginning earlier than standard morning sickness, and lasting beyond the typical cutoff at 12 weeks." Jessie Rubin, M.D., an OB-GYN in Houston, Texas, tells Parents the condition affects 2 percent of pregnant women. That percentage may not seem like a lot people, but for those suffering through the never-ending nausea and vomiting — often to the point of losing weight during pregnancy instead of gaining — it can be dangerous. This type of illness usually happens with a first pregnancy, and those affected are more likely to have it in other pregnancies. While the cause of this particular condition is unknown, some studies suggest it has to do with the human chorionic gonadotropin hormone, or HCG, because it's unusually high during pregnancy. There are some medications available that can provide relief, but only under the advice of a trusted doctor.

With typical morning sickness, you shouldn't have pain (either cramps or general pain in your lower back) or the onset of a fever. In cases of extreme or prolonged illness with these additional, aforementioned symptoms, you should check in with your doctor to be sure you aren't at risk for miscarriage or pre-eclampsia. You shouldn't lose weight or become dehydrated as a result of your morning sickness, either. During pregnancy, you should try to consume eight to 10 glasses of water a day, according The Journal of Perinatal Education, and that amount should help fend off dehydration. Dehydration can cause premature birth due to a decrease in blood volume and an increase in oxytocin, so it's vital that you consume water, rest, and make sure you're not suffering from sever nausea. In some cases, hospitalization and IV fluids may be necessary to replace the electrolytes lost as a result of constant nausea and vomiting.

The bottom line is, if you're into the second trimester and still experiencing regular morning, noon, and night sickness, you should talk to your doctor to rule out something more serious.