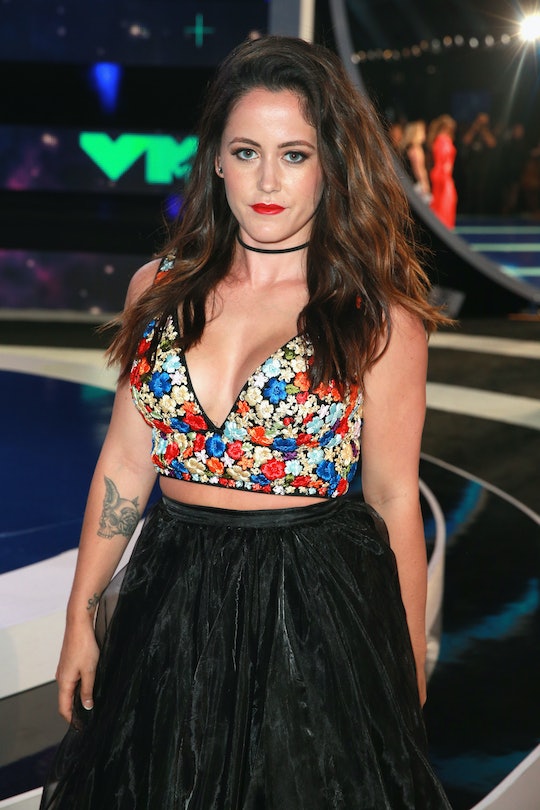 Teen Mom 2 star Jenelle Evans called 911 on Oct. 13 2018, to report an incident of domestic abuse against her husband of two years, David Eason. Although Evans has since referred to the situation as a "drunk and dramatic misunderstanding," some fans still have concerns about her relationship and how these allegations might affect her three young children. To gain some insight into Jenelle Evans' 911 call, Romper reached out to violence against women consultant Julie Owens, a well-known authority on domestic violence with 30 years of experience in the field.

Before TMZ released Evans' disturbing 911 call, her representative chalked up the night in question to an accident with a bonfire. The rep told People that at some point during an evening with friends, Evans "ended up tripping and falling by the fire."

But Evans' call to 911 painted a different story. “My husband ... just assaulted me. He pinned me down on the ground," Evans told the operator, according to HuffPost. "I think I heard my f*cking collarbone crack. I can’t move my arm.” She added, “[He's] been drinking and I think that he got violent ’cause he was drinking. I’m recovering from a surgery I got on Monday."

Evans and Eason did not immediately respond to Romper’s requests for comment.

Evans also noted that her three children (Jace, 9, Kaiser, 4, Ensley, 1) and her 11-year-old step-daughter, Maryssa, were asleep in the house upstairs when the alleged incident occurred. "I have four kids in the house with me right now and they’re all sleeping and…I don’t know what to do," she said.

Following the release of the 911 call, many fans shared concerns about the well-being of Evans’ children.

“I'm trying to be sensitive considering this is a very serious topic,” one fan wrote on Reddit. “But tbh, I'm worried for the kids more because this can't be a good situation for them even in the best case scenario.”

“My main concern is for the kids that don’t have a choice in all of this,” someone else said. "Those are the ones I’m truly concerned about.”

Though it's not entirely clear what prompted that 911 call, experts say witnessing domestic violence can have life-changing effects on children.

"Research tells us that witnessing domestic violence causes as much psychological harm as being physically abused themselves. The boys are very likely to take after the father and his beliefs about women and how he treats women," Owens, a domestic violence survivor and expert witness in both criminal and civil cases regarding domestic violence tells Romper in an interview. "It affects the girls as well — they learn that people who love you hit you and that it’s 'normal.' They are more at risk to stay in an abusive situation because they believe that’s just how it is."

As for physical effects, Owens explains:

The children have physical effects too. They can get headaches, stomach aches, they have anxiety, sleep disorders. Or they have a hard time focusing and studying at school because they’re traumatized. A lot of times they get misdiagnosed with ADHD and things like that, but really it’s trauma. Even the little ones. We’re learning now that even when women are pregnant, fetuses are affected by trauma and by the stress hormones that flood the brain during a traumatic episode.

A March 2016 study conducted by the University of Iowa published in BJOG: An International Journal of Obstetrics and Gynaecology found that "women who experience domestic violence during pregnancy have a much higher risk of their babies being born prematurely and having low birth weights, both of which can lead to lifelong health problems," according to Parents.

Those lifelong health problems can include "an increased level of anxiety or problems with concentration, problems with emotional regulation and memory because of the cortisol effect on the fetal brain," according to Essential Baby.

Of course, there are many fans out there who are urging Evans to leave Eason. But Evans continues to deny the allegations of domestic abuse, first telling E! News that it was nothing more than a “drunk and dramatic misunderstanding.”

On Oct. 26, 2018, Evans released a YouTube video addressing the ongoing speculation about her marriage and the night of the 911 call. She said, according to Newsweek:

I know everyone's concerned about me, and I know everyone wants to know, "Is she OK? How are the kids?" Everything's fine. You know, I’ve been in so many domestic violence situations in the past that I would not put up with it now. So I don’t know why you guys would think that I would continue to stay in this relationship if I was being abused.

Though Evans says everything is fine between her and Eason, it's important to consider why someone would possibly have conflicting statements about an incident.

Owens, who "founded a hospital DV crisis response team, a transitional shelter, advocacy groups, and training programs," explains to Romper that it's typical for a victim to "recant" after they accuse a partner of abuse. She says:

It’s very common that victims will call the police in the midst of an assault because they’re afraid and they need help at the moment. But then once they’re safe, most of the time, the abuser will — at least early in the relationship — will apologize and beg for forgiveness and promise not to do it again. And the victim often really has pity on him, doesn’t want him to go to jail, and doesn’t want the embarrassment. So, they recant. This is a very classic and typical situation. And it really happens to folks of any age.

Although Owens hasn't met Eason or Evans, her background consulting with the federal government, universities, medical organizations, and state agencies regarding domestic violence makes her qualified to speak on the dangers of leaving an abusive situation. She tells Romper:

If the abuser is not asking for forgiveness, they’re threatening to hurt you, or your family, or the children and others if you don’t recant or if you go through with prosecution. ... Often, it’s both. The abuser will start out begging forgiveness and end up threatening if that’s not working.

There are also misconceptions about domestic violence situations floating around, which has led to some fans unfairly shaming Evans for not leaving. It’s crucial to understand that leaving a domestic abuse situation is extremely dangerous for victims, and that it often requires extensive planning and resources. Owens shares:

The most dangerous thing a victim can do is actually leave, and victims know that. So, they will often stay after an assault but plan their exits, knowing that they have to do it secretly and very carefully. Especially when you’ve got four children and you’re trying to figure out, "How am I going to be able to maintain confidentiality and be in a safe place without him following us."

All of that being said, fans can't know what's really going on with Evans' home life. But if there is cause for concern, there are resources out there.

Owens' website, for instance, has a FAQs page dedicated to answering common questions posed by victims. Some important topics include but are not limited to: how to leave an abuser safely, how to tell if you're in danger, and whether your abuser will "change." She also provides resources for people who are hesitant to leave an abusive relationship due to religious convictions. You can visit www.domesticviolenceexpert.org for more information.

Going forward, fans should avoid judging Evans' actions regarding this incident. Although it's reasonable to express concern for Evans and her young kids, it's not OK to make assumptions about a person who is possibly involved in a domestic violence situation. During this sensitive time, Evans, Jace, Kaiser, Ensley, and Maryssa need support and understanding.