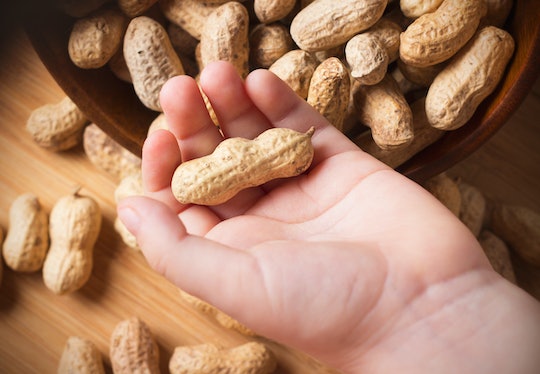 Although many of us have experienced the shocking and uncomfortable feeling that occurs when bits of food or drink travel down the wrong pipe and cause us to choke, a viral photo of a child's blocked trachea serves as a startling reminder of just how dangerous small foods can be when they get trapped in the wrong place. Food is a common choking hazard in children and Romper spoke with a few experts about the viral photo and to gain their insight on how parents can take preventative action.

Commonly called the windpipe, the trachea isn't supposed to play host to food, drink, or other foreign objects. But sometimes, as we've all undoubtedly experienced, food or other foreign material can escape the mouth (and esophagus) to land in the trachea, where a few good, strong coughs will be needed to propel the object out. Unfortunately, many young children don't have a cough reflex strong enough to expel a foreign body from their airway.

"Do you see something there?" a recent post to the I Heart Autopsy Facebook page asked its followers about a photograph of a child's preserved respiratory block, including the larynx, trachea, and lungs. "Yep. It's a peanut, and it's what caused this kid to die."

The act of breathing a foreign substance such as a food, liquid, medicine, even saliva into your airways is called aspiration and it can lead to choking. And while choking can be dangerous for any age group, it's "one of the leading causes of unintentional deaths for infants," according to the National Safety Council. In fact, as the I Heart Autopsy Facebook post pointed out, even small foods like peanuts can cause problems.

"Foods are the most common thing that children choke on and it's most common in children ages 3 and younger," Dr. Linda Fu, a general pediatrician at Children's National Health System, tells Romper. "Small hard foods such as peanuts and those that can block off the entire airway are the types of foods that are most dangerous for that age group."

Indeed, a number of commentators on the I Heart Autopsy Facebook Post were either folks who vividly remembered choking on a small food item as children, or parents recounting tales of watching their children inhale food down the wrong pipe. "This happened to my daughter when she was eating almonds," one commentator wrote. "She coughed and the pieces were sucked back into her lungs. She had aspiration pneumonia and spent a few days in the ICU."

Part of the problem, according to Dr. Kathy Monroe, a pediatric emergency medicine physician at Children’s of Alabama and University of Alabama Medical Center, is that young children may not have fully developed molars with which to really chew their food up with. Or, for a variety of reasons including simple distraction, they simply don't chew things up thoroughly when eating. For this reason, Monroe recommends parents and caretakers teach children to sit down when eating and chew each bite thoroughly.

"It's a great practice for all of us because when you're distracted or you're walking around there's a higher risk of choking," Monroe tells Romper. "So, sit to eat."

Because coins are another item children tend to choke on, Fu cautions against cutting foods into the size or shape of a coin. "Coin size is bad and coin shape is bad because they can choke off the airways," Fu says. "So, when you have something small and hard such as carrots they shouldn't be cut into a carrot coin, they should be shredded if you want to give them to children." Similarly, she recommends grapes and hot dogs be cut into quarters rather than halves or rounds before being given to young children.

As many of the parents who commented on the I Heart Autopsy Facebook post can attest, a choking child can be a scary situation for any caretaker. "My daughter choked once," one person wrote in a comment on the post. "It scared me to death.. as a parent I needed to learn the Heimlich and CPR [to keep] my little girls okay."

Although food is a common choking hazard, Monroe and Fu both stress that toys and other items like coins and latex balloons can also pose a choking hazard to young children. They recommend parents and caregivers read labels on toys carefully to determine how age appropriate they are and examine any toys bought or received secondhand for potential choking hazards. "Anything that is the size of a child's fist or smaller is a potential choking hazard and that can include pieces of toys," Fu tells Romper.

Although perhaps a little grim, the recent post by I Heart Autopsy is a powerful reminder for parents about how dangerous even small foods can be, and how important it is to chop foods into pieces smaller than a child's airway as well as learn the basics of CPR and how to perform the Heimlich maneuver on children and infants.