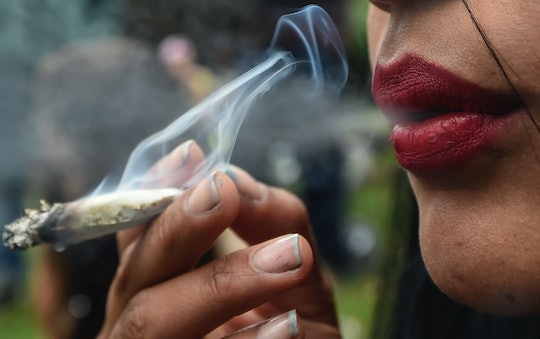 ACOG Still Advises Against Using Marijuana While Breastfeeding & During Pregnancy

Although medical professionals have weighed in on this topic before, experts still advise against using marijuana while breastfeeding and during pregnancy, according to the American Congress of Obstetricians and Gynecologists' latest update released on Tuesday. But, in light of this unwavering advice, homeopathic remedies have grown exponentially in popularity over the last few years. And medicinal marijuana and prescriptions for cannabis products have emerged as a smart method of combating certain illnesses and health concerns. But, how and when marijuana is used is still fairly controversial.

According the ACOG's October update, "there are insufficient data to evaluate the effects of marijuana use on infants during lactation and breastfeeding, and in the absence of such data, marijuana use is discouraged." However, the latest guidelines do mention that current "evidence does not suggest an association between marijuana use in pregnancy and perinatal mortality, although the risk of stillbirth may be modestly increased."

As Psychiatry Advisor noted, the report also found that "women who used marijuana at least weekly had a higher risk for having a baby with low birth weight."

Essentially, because there's not enough data to fully understand the lasting effects marijuana use would have on infants while breastfeeding, the ACOG is erring on the side of caution since a "growing number of states are legalizing marijuana for medicinal or recreational purposes, and its use by pregnant women could increase even further as a result," according to the report. The organization added:

Because of concerns regarding impaired neurodevelopment, as well as maternal and fetal exposure to the adverse effects of smoking, women who are pregnant or contemplating pregnancy should be encouraged to discontinue marijuana use.

The ACOG reports that marijuana is the drug most commonly used during pregnancy, with anywhere from 2 to 5 percent of women, in most studies, and 15 to 29 percent of "young, urban, socioeconomically disadvantaged women" using it while they're expecting.

While the ACOG has made these sort of recommendations before, according to The Los Angeles Times, the California Department of Public Health has officially announced earlier this month that "consuming cannabis is not recommended for women who are pregnant or breastfeeding, or who plan to become pregnant soon," noting that it "can affect the health of your baby," although there is no mention of exactly how.

However, cannabis news site HERB noted that Tetrahydrocannabinol, or THC, can be passed on to babies via breast milk. The site explained:

THC is stored in fat, and breast milk contains an awful lot of it. In fact, in heavy marijuana users, there can be up to eight times more THC in breast milk than in the mother’s bloodstream.

Meanwhile, the U.S. National Library of Medicine has previously acknowledged that it's unclear how harmful breastfeeding might be to an infant, but that it's best to play it safe, explaining:

Marijuana use should be minimized or avoided by nursing mothers because it may impair their judgment and child care abilities. Some evidence indicates that paternal marijuana use increases the risk of sudden infant death syndrome in breastfed infants ... Because breastfeeding can mitigate some of the effects of smoking and little evidence of serious infant harm has been seen, it appears preferable to encourage mothers who use marijuana to continue breastfeeding and reducing or abstaining from marijuana use while minimizing infant exposure to marijuana smoke.

Without breastfeeding and pregnancy as factors, according to the National Institute on Drug Abuse, THC has many positive benefits, notably that it "can increase appetite and reduce nausea" and "may also decrease pain, inflammation (swelling and redness), and muscle control problems."

While there is admittedly not enough evidence regarding marijuana use while breastfeeding out there at present, the ACOG's stance on it has stayed the same for now.