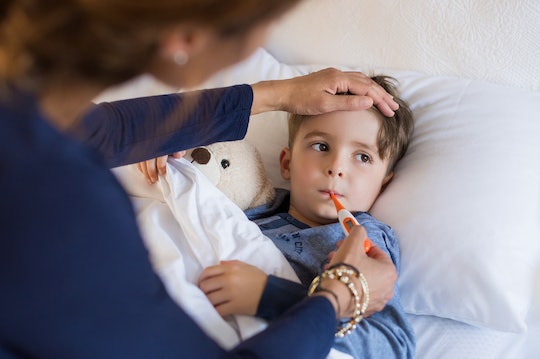 The icy chill and daylight-deficient specter of winter is bearing down on much of the United States, and with it comes the simultaneously dreaded and inevitable flu season. And it turns out that, this year, an awful flu season could be on the way. Which means that, among the U.S. population, coughing, runny noses, and sore throats are likely to be especially ubiquitous. At least, that's the conclusion a team of infectious disease doctors came to after analyzing the flu season in Australia, which just wrapped up. Yep, it was bad, and all signs indicate that the same will be true in the Northern Hemisphere as the year draws to an end.

Australia, as researchers pointed out in a perspective paper published in The New England Journal of Medicine Wednesday, experienced record-high influenza rates this year. This, as researchers suggest, is mostly likely due to the vaccine developed to combat the illness was a bad match for the strain of influenza that ultimately circulated, ABC News reported. So, the vaccine was reportedly only 10 percent effective in Australia this year, and because the vaccines there and in the United States have the "same compositions," professionals are predicting that Americans very well could be in for it as well, the outlet reported.

But, despite this issue, getting the flu shot is still better than not getting it. "However imperfect, though, current influenza vaccines remain a valuable public health tool, and it is always better to get vaccinated than not to get vaccinated," the team emphasized of the findings, according to ABC News.

By contrast, the flu vaccine from last season was 34 percent effective against the H3N2 strain of the virus — the same one shaping up to be the most prevalent this time around — and even that resulted in "widespread misery," as Melissa Healy of the The Los Angeles Times put it.

Still, the researchers who worked on the paper are far from decrying the importance of flu vaccinations. In fact, director of the National Institute of Allergy and Infectious Diseases and study author Dr. Anthony Fauci told The Los Angeles Times that a vaccine will prevent some people from getting sick, which is always a plus, as well as allow for those who do get sick to endure a shorter illness.

But the study's authors did offer an endorsement of a possible solution to the problem of mismatched vaccines and viruses: a universal flu vaccine. Such a vaccine would eliminate the need for professionals to have to try to anticipate which strains of the notoriously unpredictable flu will circulate in any given year, according to TIME magazine. That would mean that they would not have to create a vaccine based on oftentimes less-than-perfect projections, and also that Americans would not have to get vaccinated annually.

Such a solution could be quite a ways from becoming a reality, however, as even the most advanced of these universal flu vaccines are in the earliest stages of human testing, The Los Angeles Times reported. There are even some that are currently undergoing animal testing.

For now, the Centers for Disease Control and Prevention (CDC) recommends that children 6 months of age and older get a flu vaccine each year. After all, doing so is still a person's best line of defense against getting sick and to prevent getting others sick as well.

Besides hoping that you and your family are part of the lucky 10 percent for whom the flu vaccine will be effective and making sure to get a flu shot, there are a few actions you can take to minimize the anticipated horrors of the flu season. In addition to following the CDC's flu shot guidelines, knowing what medicines to take if you or your kid does get sick could really help. And, as always, it's a good idea to closely monitor potential flu symptoms and to see a doctor if they do begin to show themselves.