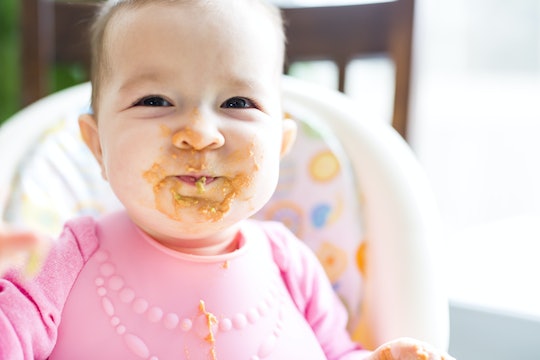 Germs Might Protect Kids From Leukemia, Study Says, So Go Easy On The Hand Sanitizer

Bringing a new baby home for the first time can easily turn even the most laid-back parent into a total germaphobe. It's natural to want to keep your little, perfect human from being exposed to other people's coughs, sneezes, and unwashed hands, of course, and if you've given birth during the height of cold and flu season, your instinct may be to hide at home with an arsenal of disinfectant sprays. But a new study published earlier this week in Nature Reviews Cancer found that exposing infants to germs may reduce their leukemia risk in childhood, according to CNN. And while that doesn't exactly mean we should all throw proper hygiene out the window, it does at least suggest we might not need to be super paranoid about keeping our little ones germ-free.

Institute of Cancer Research Professor Mel Greaves authored the study, and after "[reviewing] more than 30 years of research" into acute lymphoblastic leukemia (ALL) — the most common form of childhood cancer — he found that children who were exposed to fewer germs during their first year and who also interacted less with other children were more likely to develop ALL than those who were exposed to certain infections earlier on in life.

Greaves' findings may mark a major breakthrough in the medical community's ability to understand how ALL may be able to be prevented, and that's a pretty big deal. His conclusion? That ALL "has a clear biological cause," according to CNN, and that it is ultimately triggered in children whose "immune systems have not been properly primed" by germ exposure.

Parents shouldn't worry too much if they've spent their children's infancies sanitizing everything in sight: Greaves emphasized that children who develop ALL are also predisposed to developing the disease because of a genetic mutation that occurs before birth. In other words? It's the combination of having the genetic link and the lack of exposure to pathogens that seem to lead to ALL. And even then, the study noted that the mutation is in no way a guarantee of childhood leukemia: only 1 percent of genetically predisposed to ALL will actually develop it.

So what's the takeaway? It's likely too soon to actually know for sure. The good news, at least, is that Greaves' work appears to debunk certain theories about the cause of ALL in kids, like the notion that it was caused by electro-magnetic waves or pollution (it's not). It does suggest though that it may eventually be possible to prevent the development of ALL entirely — if "priming" a predisposed child's immune system by exposure to certain infections can protect them against leukemia, further research into exactly how that should be done could one day lead to a huge drop in the number of Americans diagnosed with ALL each year (nearly 6,000, according to the American Cancer Society).

Until that day comes, parents can also take comfort in knowing that, while ALL is the most common childhood cancer, it's still very rare. And even though no child should ever have to endure cancer treatment, the British health site, NHS Choices, has noted that, in 90 percent of cases, ALL can at least be cured by chemotherapy.

Some other potentially helpful takeaways? Previous research into ALL suggests that there are certain things that may be linked to a reduced ALL risk. Kids who have been to daycare appear to be less likely to develop ALL, according to NHS Choices, as are kids with older siblings, and those who have been breastfed for at least six months — all of which point to the potential impact of exposure to germs and infection. Being born vaginally may also provide a protective effect compared to C-section birth, possibly due to the exposure to bacteria in the birth canal.

For now though, it's important for parents to keep in mind that, while their child's risk of ALL is low, the risk associated with infections in infants is much higher, and, as such, they should definitely still work to keep their infants as healthy as possible. Some doctors recommend parents keep their newborns away from crowded areas like malls or grocery stores for the first few months, according to KidsHealth.org, though the general consensus seems to be that infants should at least be kept away from anyone who is sick — and those who do interact with your baby should definitely wash their hands.

One caveat to the "ease up on the disinfectant" idea? For some babies, germs and bacteria can be particularly dangerous. Premature babies, and all other children who have spent time in the NICU, have a greater risk of infection than other babies, according to the March of Dimes, and that means parents need to take extra precautions. That may include limiting the number of visitors the baby is exposed to; ensuring that everyone keeps their hands clean at all times; keeping babies away from crowded public places, anyone who is sick, or anyone who smokes; and ensuring that anyone spending time with your baby has been fully vaccinated (especially for pertussis, or whooping cough).

Cancer is something that no one likes to think about, and it's especially awful to consider when it affects children. But from the sounds of it, science may be getting closer to understanding how to better protect those at risk. In the meantime, it's a reminder that going overboard with cleanliness might not always be the best option. Which, given how skilled babies seem to be at putting everything in their mouths, no matter how disgusting, is pretty reassuring.